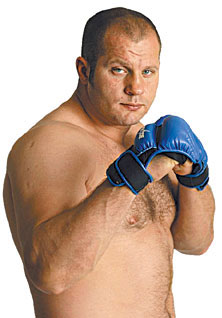 A month ago Strikeforce CEO Scott Coker sounded optimistic about the progress being made in the promotion’s negotiations with MMA heavyweight legend Fedor Emelianenko. Things sounded even more promising when MMAWeekly reported that Fedor could face Antonio “Bigfoot” Silva at Strikeforce’s Jan. 29 event in San Jose, Calif.

But negotiations involving M-1 never seem simple, and MMAJunkie soon followed up with news that, although negotiations are moving along well, a Jan. 29 return for Fedor is “not on the table.”

It’s a shame, really. Fans want to see Fedor try and bounce back from his first loss since 2000 and what many consider the only true setback in his illustrious career, a first round submission loss to UFC veteran Fabricio Werdum on June 26.

Fedor could retire today and still go down as one of the best, if not the best, mixed martial artist of all time. With all of the battles he’s been in, dominating the PRIDE circuit and recently stringing together stoppage wins over Tim Sylvia, Andrei Arlovski, and Brett Rogers, I’m sure Fedor doesn’t have any regrets about his fighting career and he probably shouldn’t.

Still, time and again, as humble, respectful, and impressive as Emelianenko has been, his management team has never really shown any sense of urgency to keep him active or always fighting against the best of the best. After a signature win over Mirko Cro Cop at PRIDE: Final Conflict 2005, he didn’t face an opponent considered a top-level, legitimate heavyweight until 2008 against Sylvia. Instead, we saw freakshow matches against Zuluzinho and Hong Man Choi and wins over a past-his-prime Mark Coleman and undersized Matt Lindland.

Emelianenko is a true warrior that seems ready and willing to fight whomever and whenever. And if his failure to ever sign with the UFC or settle his Strikeforce negotiations sooner has to do with him maximizing his investment, more power to him. But if it’s because M-1 is looking to maximize their own investment off of Fedor’s name, that’d be a shame. Maybe Dana White’s right. Maybe M-1 has been the problem. Or maybe White’s just a promoter looking to defend his own interests just as M-1 is looking to defend the best interests of Fedor. For Fedor’s sake, I’m hoping it’s the latter.