Mauricio “Shogun” Rua would be honored to fight Couture

Former UFC champion and Hall-of-Famer Randy Couture set off a wave of speculation of epic proportions when he recently tweeted that he was “at the end” and might be thinking about hanging up his MMA gloves.

However, Couture’s legal representative and other media reports, such as this one by the L.A. Times, clarified that Couture hadn’t made any decision yet, and would be open to bouts with either UFC light heavyweight champion Mauricio “Shogun” Rua or former titleholder Lyoto Machida.

Whether either of those bouts could come to fruition remains to be seen, but for what it’s worth, Shogun announced via Twitter that he’d be “honored” to fight a legend like Couture. 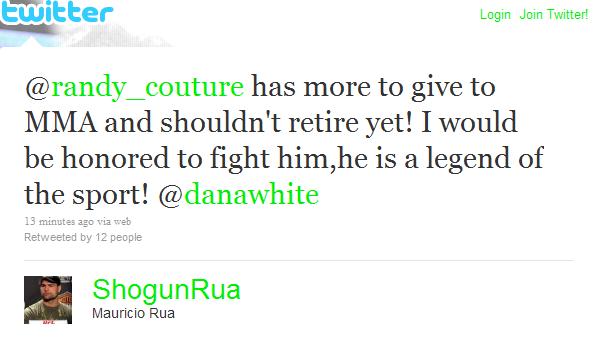 First, though, Rua will have to defend his belt against the 205-pound number one contender, Rashad Evans.