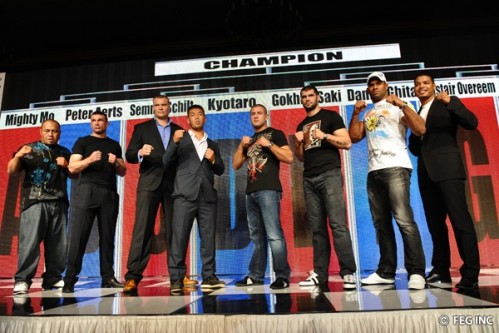 The K-1 World Grand Prix Final 2010 will air live on HDNet starting at 2 a.m. ET. For the 18th-straight year, K-1 will look to crown a World GP champion. Last year’s champion Semmy Schilt has a chance to break the record for most titles with five.

ProMMAnow.com will provide live results and commentary of the 2010 K-1 World Grand Prix Final. You can check out something resembling a preview and enter the Mann Talk Bracket Contest here.

The broadcast is live. Michael Schiavello, Mike Kogan and “King” Mo Lawal are on the call. Apparently, rumors have been swirling that Ghita is sick, hurt or both. This is terrible news for my Bracket. Kogan has picked Spong to upset Overeem in the first round.

We start the night with the reserve fight. Zimmerman comes out to some Blade-Trinity-level techno music.
Round 1 – This round was almost all Teixeira. He actually came forward and landed with his hands. He was able to snake shots in around Zimmerman’s defense. He then worked his kick off his punches. This was really impressive, since Teixeira is usually not this aggressive. All three judges give the round to Teixeira 10-9.

Round 2 – Teixeira started this round off with a more vintage performance. He worked the outside with some high leg kicks. However, he is able to score with counters almost as well. He also came forward and forced Zimmerman back into the corner. Zimmerman looked like his conditioning was starting to fail him. All three judges go to Teixeira 10-9

Round 3 – Having the fight mostly in hand, Teixeira circled away a lot in this round. He used his kicks to keep Zimmerman on the outside and defended well. When Teixeira landed a Brazilian kick, Schiavello made sure to bring up the “Question Mark” Kick. Impressive performance from Teixeira.

I am fascinated by American Samoa. It has got to be odd to grow up on an island the size of Washington, D.C. Also, Mo was announced at 125 kg. That is a pretty good weight for him. According to Schiavello, he did not bring corner men with him to Japan.

Round 1 – Unsurprisingly, Mo ate a groin shot in the first round. That is like four-straights fights with a groin shot for him. Mo’s game was to get inside by rushing. Aerts saw him coming and dropped him with a huge head kick. After that, Mo looked like he was working for takedowns. Eventually, Aerts brought the shin up again and finished Mo. The name of the game is win and advance.

Round 1 – Kyotaro’s style involves a lot of circling and shuffling on the outside. Schilt has problems when fighters pressure him. This round was basically Schilt chasing Kyotaro around the ring. He landed some, but not enough to take the round. Although, two of the judges gave Schilt the round 10-9.

Round 2 – K-1’s awkward clinch rules have created some strange moments in this fight. This was a better round for Schilt. His jabs and straights were landing at will. When Kyotaro came forward, he got caught. Schilt’s pace had a visible effect on his foe. The scorecards were 10-9, 10-9, 10-10 for Schilt.

Round 3 – Kyotaro tried to take King Mo’s advice and “go crazy,” but in the final round, he really struggled with Schilt’s reach. When Kyotaro threw, Schilt was out of range and the taller fighter landed. Schiavello did get in a reference to Miley Cyrus’ bong.

Round 1 -Clearly, this was the round of the night. Both fighters were determined to land kicks. Saki was the faster fighter and scored with kicks to the legs. Ghita focused on the body and scored to both sides. He also landed a nice high kick that smacked through the arena. The cards are 10-10, 10-10 and 10-9 Ghita

Round 2 – The winner of this fight is going to have a tough time in the next round. Both of the fighters punished the other with kicks to the legs and body. Saki started strong, but his speed began to leave him towards the end of the round. Whenever he stopped moving, Ghita scored. Judges went 10-10 across the board.

Round 3 – Saki had his best round of the fight. Ghita slowed down significantly after the midpoint of the round. Saki was able to close the distance with leg kicks. Once inside he landed several nice right hands. one judges scores it for Ghita and the other two have it a draw.

Round 4 – When Saki was able to get inside, he scored at will. However, at points in the round he seemed content to stay outside. When Saki was outside, Ghita was able to land his kicks. Saki’s hands made the difference and he took the decision. If Ghita was sick coming into this fight, it showed. He slowed down a great deal after the second round.

Round 1 – The size difference between the two fighters is staggering. Spong landed a nice burst early in the round. It looked like Overeem was seriously hurt for a second, but he recovered with a strong guard. He had to ate several tough body shots. Overeem had trouble catching the quicker fighter and also got warned twice for kneeing with a two-arm clinch. All three judges give it to Spong 10-9.

Round 2 – Spong came out in the second round with a totally different game. He stood in the pocket with Overeem and exchanged in close quarters. It looked like Spong really slowed down and Overeem got back in the fight. Two judges gave it 10-9 to Overeem and the third judge has it 10-10.

Round 3 – Overeem used some nice footwork to angle Spong into the corner. He patiently worked power shots and the referee called a standing eight count. Spong was clearly not all there, but he kept fighting strong. The standing count was really the difference since that made it a 10-8 round across the board. Spong had a nice plan early, but he got sucked into a close-range battle.

Round 1 – Gerges had a big size and technical advantage. After Fujimoto went down the first time, it was basically over. Gerges put Fujimoto down for the third time in the first round and took home an easy victory.

Advertisements for Five Hour Energy are so much more effective at 4:48 a.m. ET.

Round 1 – Aerts is always the toughest test for Schilt. It looked that way early. Aerts was scoring with rights and lefts. However, as the round went out, Schilt started to land more and more. At one point, Aerts got caught in the corner and ate some shots. Once again, Schilt’s output is making the difference for Schilt. The scores are 10-10, 10-10 and 10-9 for Schilt.

Round 2 – Schilt was the fresher fighter in the second round. However, Aerts was able to land when he made a concerted effort to come forward. Schilt was able to do most of his work when backing up. On two occasions, Schilt let Aerts out of the corner for no reason. All three judges have it 10-10.

Round 3 – Aerts was able to land some hard shots. He was then able to drag his Schilt into a brawl. After a brief brawl in the middle of the round, Schilt had no offense. He was backing straight up and eating shots from Aerts. This is why he is the worst match up for Schilt.

Round 1 – Saki came out looking great. He landed with kicks and was able to move in and out. He even landed a spinning hook kick to the head. Overeem landed a hard body kick to the right side of Saki’s body and it obviously hurt. Overeem waited until he got another chance and landed again. Saki took a standing count and could not continue.

The broadcast team says later that Saki has a broken right hand and elbow.

Round 1 – It looked like Kharitonov was taking control of the fight with hard body shots and some slick boxing. He got caught with a knee, and was clearly hurt. He tried to clinch, but he eventually went down. After the count, he was still in trouble. Jaideep landed another shot, and then Kharitonov did the chicken dance. The referee stoopped the fight. This is a pretty big set back for Kharitonov.

Round 1 – Overeem came out on fire. After starting slow all night, he went right after Aerts. Overeem backed the veteran into a corner and decimated him with head and body shots. This was a very impressive performance for Overeem. He clearly takes the pinnacle spot of the most successful MMA fighter to cross over to K-1