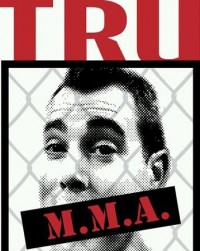 Aaron Tru a.k.a. Jew-Pac, is one of MMA’s most noteworthy reporters. We have seen him sacrifice his body and mind for the sake of getting the story. He’s taken leg kicks from Fabricio Werdum, had his testicles bitten by psychotic fighter Greg Gaggenwanker, got knocked out by a midget, smelled the excrement of Tom Lawlor and of course, went to sleep in the arms of Cristiane “Cyborg” Santos.

Now this groundbreaking journalist has his own show entitled the TRU MMA SHOW. In this premiere episode Tru takes viewers backstage at “Strikeforce: Henderson vs. Babalu” in St. Louis, travels to the BeatDown 7 fights in North Dakota and gives us an inside look at the 2010 World MMA Awards where he was nominated for “Reporter of the Year.”