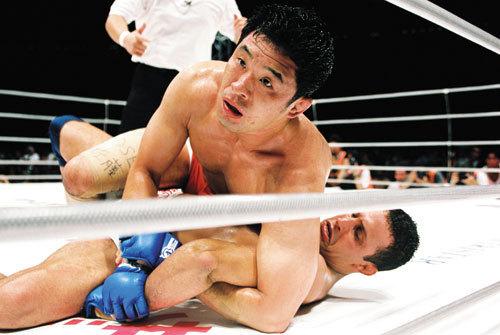 According to reports, Kazushi Sakuraba will drop to welterweight for his next fight. At Dynamite!! 2010, he is expected to meet Dream welterweight champion Mariusz Zaromskis with the title on the line. The New Year’s Eve card will take place at the Saitama Super Arena in Saitama, Japan.

NightmareOfBattle first reported the fight as a rumor on Monday. Now, MMAJunkie has followed up citing “sources close to the event.” FEG, the parent company of Dream and K-1, has yet to officially announce the match up.

For years, Sakuraba has disregarded weight limits. Despite being a natural middleweight, Sakuraba has fought consistently at heavyweight and light heavyweight.. Now, in the twilight of his career, he is headed down to welterweight.

Since defeating Karate-fighter Andrews Nakahara in the first round of Dream’s middleweight tournament in 2008, Sakuraba is a only 2-4. In his last fight, he submitted for only the second time in his career when Jason Miller latched on a arm-triangle choke.

Sakuraba quickly earned the admiration of the Japanese fans by defeating Vernon White, Carlos Newton and Vitor Belfort. His technical submission victory over Royler Gracie and 90-minute battle with Royce Gracie established him as a legend. During his time in the sport, he has fought a host of top fighters. His list of opponents includes Guy Mezger, Igor Vovchanchyn, Wanderlei Silva, Quinton Jackson, Mirko Filipovic, Antonio Rogerio Nogueira, Ricardo Arona and Ken Shamrock.

Zaromskis won the Dream welterweight title by winning the welterweight tournament. In the first round, he took a decision victory over Seichi Ikemoto. Then at Dream 10, he scored back-to-back head kick knockouts over Hayato Sakurai and Jason High to take the title. He then moved to Strikeforce, but went 0-2 with a no contest.

Despite being less than a month away from the event, FEG has not announced any fights for Dynamite!! 2010. FEG president Tanikawa announced today, via Twitter, that around 10 fights are signed and they will announce them after the K-1 World Grand Prix Final on Dec. 11.