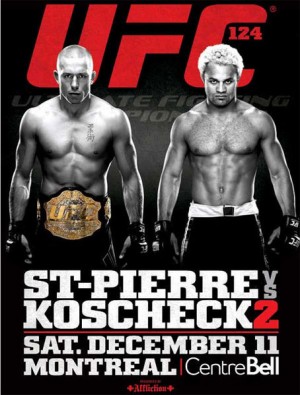 The Ultimate Fighting Championship on Friday confirmed the remaining bouts for “UFC 124: St-Pierre vs. Koscheck,” scheduled for Saturday, Dec. 11, at the Bell Center in Montreal, Quebec, Canada.

Opposing coaches on season 12 of The Ultimate Fighter on Spike TV, Georges St-Pierre and Josh Koscheck will square off for the second time in their careers. The two first met at UFC 74 in Aug. 2007, with the bout ending in a lopsided unanimous decision for St-Pierre. At the time, St-Pierre had just lost his welterweight title to Matt Serra, but this time, Koscheck will have a shot at St-Pierre’s belt.

Koscheck will be walking into enemy territory as St-Pierre, a native of Quebec, fights in front of his home crowd in this championship bout which will headline the UFC 124 Pay-Per-View card.

Koscheck has gone 6-2 since his first fight with St-Pierre. He is currently riding a three-fight win streak with victories over Frank Trigg via knockout, Anthony Johnson via submission and Paul Daley via unanimous decision.

The official “UFC 124: St-Pierre vs. Kosckeck” fight card is as follows: