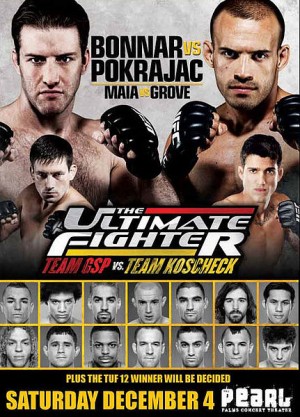 Also, “The Ultimate Fighter: Team GSP vs. Team Koscheck” finalists Jonathan Brookins and Michael Johnson, both representing Team GSP, will square off for a shot at becoming the season 12 Ultimate Fighter and winning a six-figure contract with the UFC.

Here are the ProMMAnow.com staff picks for the TUF 12 Finale:

JOHN BUHL: I don’t think Bonnar is all that incredible in any one area. But he’s had more experience against tougher competition than Pokrajac, whose only win came via submission over James Irvin. Based almost solely on his experience and recent win over Soszynski, I’ll take Bonnar by decision.

RICHARD MANN: I am still shocked that Gerald Harris does not have a job, while Bonnar is headlining a card. This would be like George Lopez hosting “The Tonight Show,” while Jay Leno sat outside begging for change. Pokrajac has not been the same since his injuries. He even got out struck by Vladimir Matyushenko. This should not be that hard for Bonnar to score a rare win. Bonnar by decision.

DENNY HODGE: Bonnar is back to headline a TUF finale, hoping to regain some of the magic he was rocking back in 2005. Bonnar rebounded from a 3-fight losing streak, taking out Sosznyski in their rematch in beautiful fashion. This one will be similar, as both guys will leave the cage bloodied and battered. Bonnar will win by heart and brawl, taking the decision over “The Duke”.

JACK BRATCHER: I think Bonnar will be coming in with more confidence after the win over Soszynski. He says he is getting back to doing things his way and it seems to be paying off. Bonnar by decision.

JOHN BUHL: Honestly, I expected Johnson to fade down the stretch against Nam and get worn out and possibly stopped. But to his credit, he’s shown a ton of heart. His wrestling and athleticism will make things interesting, and he’s an OK striker, but Brookins just looks like he’s on another level. Guys that try to out-muscle him get tossed on their butt and he’s incredibly slick and strong on the ground, where Johnson is the weakest and potentially susceptible to getting tapped. Brookins takes it by late second round submission.

RICHARD MANN: I have watched maybe 10 minutes of this season of “The Ultimate Fighter.” However, I am putting my chips in on Jonathan Brookins. Of course, he is small for lightweight, but he has a grinding style that should lead him to a victory. Brookins by decision.

DENNY HODGE: Brookins was one of the most impressive fighters from this season of TUF, and Johnson squeeked by a very game Nam Phan to set up this match up. Johnson throws some wild punches looking to set up his take downs, but that formula will be tough against Brookins. Brookins is as tough as they come, and will be a handful for Johnson no matter where the fight goes. Johnson also has to contend with the take down attempts of Brookins, so he will be more tentative than he was against Phan. Brookins will win this one easier than most expect. Brookins by submission.

JACK BRATCHER: Brookins seems to have improved quite a bit since WEC 36 when Jose Aldo picked him apart. I don’t think Johnson will have the skill to deal with Brookins. Johnson used a lot of takedowns in the semifinals against Nam Phan. I think if he tries that  game plan with Brookins he will end up getting submitted. Brookins via submission.

JOHN BUHL: This fight should be the main event and should provide plenty of entertainment. Maia showed a very good all-around game against Mario Miranda, whom I picked to score the upset. (Goddammit I’m stupid) Grove isn’t easy to deal with on the feet or on the mat, but eventually Maia should overwhelm him with his relentless ground attack. Maia by third round submission.

RICHARD MANN: Two of Grove’s four impressive wins have come by way of submission. His sneaky bottom game and front headlock series are the most impressive parts of his game. Maia will have no problem avoiding submissions and knifing through Grove guard. Maia by decision.

DENNY HODGE: Maia is 7-2 in the UFC and his only 2 losses are to the best of the best in the division. Grove will have his hands full trying to climb the ladder in the middleweight division, and inconsistency has plagued him. There really isn’t anywhere that I can see Grove having a chance of winning this one. Maia is will work Grove to the mat and finish him there, AND get submission of the night in the process.

JACK BRATCHER: Grove is dangerous on the ground too but come on, Maia is on another level. We shouldn’t underestimate Grove and he may give Maia some trouble in the clinch, however, Maia  should get the decision. I think Grove will be able to fend off the submissions, but lose the decision.

JOHN BUHL: Could Story catch Hendricks on the feet and take control? Possibly. But I think it’s more likely that Hendricks imposes his wrestling game en route to a decision win.

RICHARD MANN: Story will serve as a great test for Hendricks. He is a tough physical fighter, who will be the easiest to takedown. However, Hendricks is headed for big things in the UFC. His team will come up with a good gameplan and make him follow it. Hendricks by decision.

DENNY HODGE: Hendricks is 9-0 and will be looking to continue his undefeated streak against the very tough Story. Nobody has finished Story before, and he is on a 4 fight win streak in the UFC. This fight will be nonstop, as Hendricks will try to maintain a dominant position after his take downs of Story. Story will be hard to hold down, and will out strike Hendricks on the feet and win by decision.

JACK BRATCHER: Both guys have impressive win streaks going, however, Hendricks is still undefeated and I predict he will keep his undefeated record in tact and finish Story in the third round via TKO.