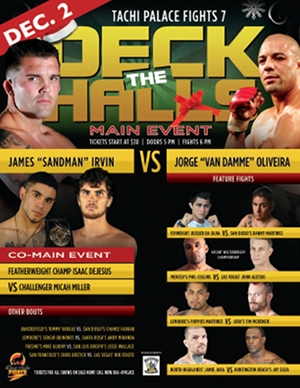 Several UFC veterans had mixed results at Tachi Palace Fights 7 on Thursday night in Lemoore, Calif. John Alessio (31-13) won the TPF welterweight title with a third round TKO, but James Irvin (15-8) suffered a first round submission loss to Jorge Oliveira (5-2-1) and Tim McKenzie (12-8) lost via first round TKO in a crazy back-and-forth bout with Seth Baczynski (12-6).

In the light heavyweight main event, Irvin hoped to keep moving up the ranks following three straight UFC losses that led to his exit from the promotion. He picked up a quick KO win in a smaller promtion but lost in equally short order to Oliveira, who returned to action for the first time in two years.

After a brief exchange on the feet, Oliveira, a Brazilian Jiu Jitsu black belt, pulled Irvin down into his half guard and moved into butterfly guard. Irvin used good posture and the fence to stay out of danger as Oliveira looked for a triangle.

He then landed some strikes from Oliveira’s guard, but Irvin made a mistake. While standing above Oliveira, Irvin dove in trying to land a fight-ending blow, but Oliveira trapped Irvin’s arm. Irvin didn’t seem to sense the danger as Oliveira wrapped his leg around Irvin’s head and locked in a triangle choke, forcing the tap at the 1:33 mark. (Update: upon closer inspection, Irvin might’ve been dazed by an upkick from Oliveira on the way down to try and land his punch)

Alessio wins the belt after a slow start

As experienced as Alessio is, it’s not surprising that he’d be patient in a five round title fight. And he was plenty patient early on, throwing few strikes in the first two rounds and giving his opponent, Phil Collins (9-6), an opportunity to get a lead on the scorecards with active, if not effective, striking.

But at the start of round three, Alessio began to open up a bit more and didn’t need much time to find his mark. Alessio followed up some wild, looping punches from Collins with a perfectly placed short left hook. The strike dropped Collins and Alessio ran in to deliver some ground-and-pound before the referee halted the bout 35 seconds into the third round.

In another featured bout, Miller and DeJesus didn’t lose any sense of urgency even without a title on the line. At a significant reach disadvantage, DeJesus ran in early to close the distance but ended up in the clinch, allowing Miller to easily trip him down and move into DeJesus’s half guard.

DeJesus scored a nice sweep and easily avoided a Miller armbar attempt and dropped some nice hammerfists. Following a scramble, DeJesus went for a guillotine, but Miller passed to side control to stay out of danger.

Even though Miller had escaped, DeJesus kept holding onto Miller’s head, even as he gave up the mount. At one point, Miller looked for an arm triangle, but instead postured up and threw some punches that caused DeJesus to roll over and give up his back. From there, Miller worked patiently to flatten out DeJesus and sink in the choke 4:11 into the match.

Baczynski wins barnburner over McKenzie with one arm

Also on the card, Baczynski, a member of The Ultimate Fighter Season 11, picked up a big win on short notice over WEC and UFC veteran McKenzie in a 174-pound catchweight fight.

Both fighters had their moments. McKenzie scored early on the feet, but later Baczynski latched on for a guillotine that he used to almost secure the mount position. McKenzie fought out of the choke and kicked Baczynski off.

McKenzie scored a takedown almost immediately, but Baczynski popped right back up. That’s when a very interesting fight became a fight of the year candidate. Baczynski threw a flurry of looping punches that didn’t connect but backed McKenzie up into the cage. He followed it up with a beautiful knee that dropped McKenzie and looked like the beginning of the end. But it wasn’t.

It turns out that he might’ve injured Baczynski’s arm, but Baczynski refused to quit. Hopped up on his own adrenaline, Baczynski pulled out his injured arm and started raining elbows with his only healthy arm. They found their mark in a hurry and McKenzie was out of it, giving Baczynski a sensational TKO 2:15 into round one.