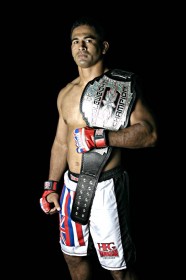 San Francisco, CA (PRESS RELEASE) – After more than a decade in mixed martial arts, veteran fighter Falaniko “Niko” Vitale (28-9; 16 submissions, 8 T/KOs) is ready to make one more run at a world championship. In order to do this, the Hawaiian warrior is planning on dropping weight for the first time in his career to compete in the 170-pound welterweight division.

After his recent X-1 middleweight title defenses over Kala Hose and Kalib Starnes, Vitale is ready for a big step up in competition – namely, he would like a rematch with current Strikeforce middleweight contender Jason “Mayhem” Miller or a fight with current Strikeforce world champion Nick Diaz. In fact, Vitale is ready to take on all challenges: “I would really like to take on all challengers at 170 and 185 pounds,” he said.

Having competed as high as 205 pounds, Vitale has decided to cut weight in order to compete in the middleweight and welterweight divisions. Vitale plans on coupling his brute strength with the speed of a 170 pounder: “I feel just as strong at 170 pounds as I did when I was 205lbs,” Vitale said.

Stars MMA, Vitale’s current management agency, is in negotiations with top MMA organizations in order to secure a multi-fight contract, which will allow him to pursue his goal of taking on elite fighters.

Niko Vitale is an experienced jiu-jitsu practitioner and wrestler who represents 808 Top Team, one of the toughest fight gyms in Hawaii. The pride of the Aloha State has appeared in major promotions such as the UFC, Strikeforce, International Fight League, King of the Cage, Rage in the Cage, SuperBrawl, and Icon Sport. With 29 wins to only nine losses, Vitale’s record is a testament of his talents as a mixed martial artist, and he has showcased these talents in matches against Robbie Lawler, recent Strikeforce middleweight title challenger Jason “Mayhem” Miller, MMA pioneer Jeremy Horn, Strikeforce/UFC veteran Trevor Prangley, and UFC veteran Frank Trigg. As a recognizable name in the sport, Vitale has gained this admiration through notable victories over UFC veteran Aaron Riley, former UFC middleweight champion Dave Menne, UFC middleweight contender Yushin Okami, 2000 Olympic Silver Medalist Matt Lindland, and UFC veteran Kalib Starnes.

On March 20,2010, Vitale defeated Kalib Starnes via submission to become the X-1 Middleweight Champion. In September, Niko defended his middleweight title at X-1: Heroes, where he submitted Kala “Kolohe” Hose via Ezekiel choke.