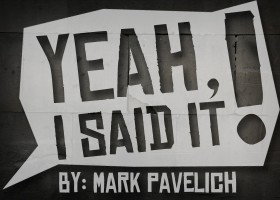 The UFC’s sponsorship policies seem to be having an effect on some of the smaller organizations. ProMMAnow.com received the following press release from Maximum Fighting Championship Owner/President Mark Pavelich on Tuesday. It even came with it’s own “Yeah I said it!” logo:

I am disgusted by the way MMA clothing brands are buckling to “DW’s” handling of contracts regarding the sponsorship of specific fighters.

It’s almost comical – not on his part but on the part of these clothing companies. They cave in and pay his organization a great deal of money just to have the opportunity to sponsor fighters, who they then pay an individual fee to as well. What these clothing brands fail to understand is that the entire organization that “DW” runs is sponsored by a competing clothing company.

These other brands are paying to represent themselves, yet they will never get the brand recognition they are seeking since the company itself has what would be considered a title sponsorship with another clothing brand – probably the most-recognizable brand in the industry. You are competing in an uphill battle that you can never win.

Now “DW” has instructed these other clothing brands that they have to stop sponsoring other MMA events or they will not be allowed to sponsor fighters in his event – even after fully paying him for the right to sponsor and paying the fighters individually. He is collecting money by the armored truck full from these companies, and yet he’s still able to tell them where to spend the rest of their money at the same time. Has he or anyone in his company ever heard of something called “restraint of trade?”

In a million years, you would never get away with this is other sports. I would like to see Nike, Adidas, or Reebok be told how and where they can spend their sponsorship dollars. It would never happen.

Maybe it’s time the Maximum Fighting Championship stopped helping MMA clothing brands build their business, and for these businesses to be bullied into these types of situations, caving in, and walking away from what helped them get launched in the first place. These companies are compromising their long-term futures and don’t even realize it.

Right now they are not even running their own companies.

“DW” is running his show … and yours.