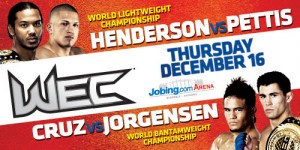 GLENDALE, Ariz. — World Extreme Cagefighting has confirmed the remaining bouts for what will be their final show before completely merging with the UFC. “WEC 53: Henderson vs. Pettis” will take place Thursday, Dec. 16, at Jobing.com Arena in Glendale, Ariz., and will broadcast live on Versus.

“This event will go down as one of the most important in the history of the lighter weight classes. The winner of Henderson and Pettis will fight for the UFC lightweight title next year, while the winner of Cruz-Jorgensen will immediately become the UFC bantamweight champion. The stakes have never been higher.”

“Each of these fights has added importance. All of these competitors want to prove that they are the best in the world and each wants to head to UFC in 2011 riding momentum. We expect some explosive fights at Jobing.com Arena on Dec. 16.”

MAIN CARD  (Televised on Versus)