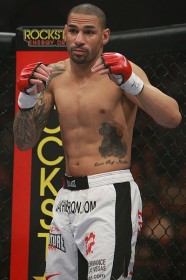 It seems like welterweight veteran Jay Hieron (19-4) has fought for every major MMA promotion in North America at one point or another, including a short stint with the UFC. After finally securing his release from Strikeforce, you can now add Bellator Fighting Championships to the list.

Hieron signed an exclusive contract with Bellator and will join the season four 170-pound tournament, the promotion announced today.

“Jay is a world-class fighter with serious talent,” Bellator Chairman and CEO Bjorn Rebney said in a press release. “I can’t wait to see him back on national television competing against other top fighters where he belongs. Jay’s a spectacular addition to  our upcoming season four welterweight tournament, where he could earn a shot at our Bellator Welterweight World Champion, Ben Askren.”

Explaining why he picked Bellator, Hieron stated, “It’s just a great fit for me. At this point in my career, I want to stay as active as possible, and the tournament format allows me to do that. It’s a great organization, and it’s just the perfect fit.”

Hieron’s accomplishments include two appearances in the UFC, a 7-2 record with the International Fight League, a win in the short-lived Affliction promotion, and two successful appearances in Strikeforce.