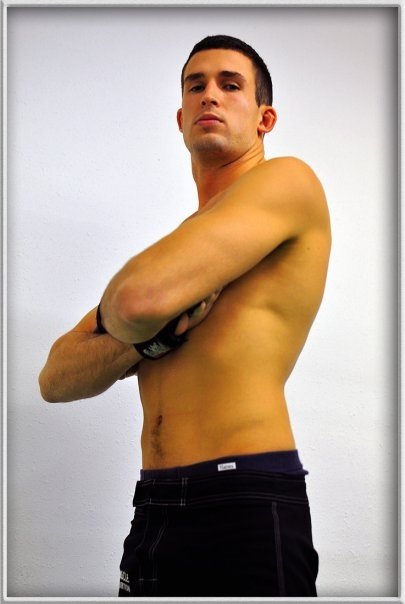 T.J. “The Spider” O’Brien (16-3) is something of a phenomenon. You see, all 19 of his professional MMA fights have ended with a submission and the majority of his wins have come from one particular submission.

The 23-year-old Iowa fighter is currently on a six-fight win streak and will make his UFC debut this Saturday against England’s Paul Kelly (10-3) at UFC 123 in Detroit, Mich.

ProMMAnow.com spoke with T.J. O’Brien this week to talk about his big show debut, get his thoughts on Kelly and find out more about this submission wizard’s martial arts background.

PRO MMA NOW: Thanks for speaking with us at ProMMAnow.com T.J., how are you feeling now just a few days away from your UFC debut and what have these last few weeks been like for you knowing you have been called up to the big show?

T.J. O’BRIEN: Im feeling great, I had a fight on October 20th so I have been able to build on my cardio and there was no period of getting the rust off for this training camp so I have been getting better everyday.

PRO MMA NOW: For those who may not be familiar with you, where are you from and where do you train?

T.J. O’BRIEN: I am from Des Moines, Iowa, I train at a couple of gyms around the area. Des Moines Jiu Jitsu and Precision Combat are my two main gyms but I also do my strength and some cardio at Aspen Athletic.

PRO MMA NOW: Tell me about your grappling background. Were you into wrestling and BJJ before MMA and where did this love of grappling come from (I assume you love it). Who has influenced you in grappling?

T.J. O’BRIEN: I never wrestled in high-school which comes as a surprise to most people since I am from Iowa (most kids start wrestling here when they are 5 or younger) but I started jiu jitsu about five years ago and I think because of my length and athletic ability there was a very short learning curve, I watched a lot of videos and then started working wth an instructor and have jumped around gyms and kind of cherry picked stuff from each instructor that would help develop my style. Lately I have been working with some division one wrestlers and it has made me a much more complete fighter.

PRO MMA NOW: You seem to have a special relationship with grappling. That is the only way I know how to say it. You’ve had 19 professional fights and all but one of those ended in a submission. What was the “other” – how did the fight end that is listed as “other” on your record?

T.J. O’BRIEN: LOL it was a guillotine choke, as an ammy I picked up two KO’s to start out with and have finished every fight with a sub since, but I always look for the KO, it’s a lot more exciting for the fans and there is a greater sense of accomplishment when you you beat some one down. 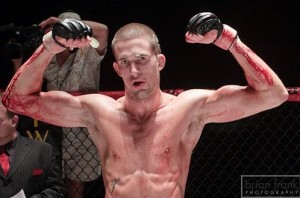 T.J. O’BRIEN: I have 12 wins by triangle. Joe Pearson currently has the record, I have given up on trying to reach it he has like 50 fights and I don’t even know how many triangles, plus I don’t want to be known as someone with one move. I finished my last two fights by rear-naked choke and my one before that by a triangle keylock kind of thing.

PRO MMA NOW: There are certain grappling philosophies that teach people to perfect one move, to make it their “go to” move, so that no matter what else happens, they will almost always be able to win with it if given the opportunity. In many ways, it makes a lot of sense. Has that been your philosophy with the triangle choke, or has it just worked out this way? Surely, it’s not just a coincidence.

T.J. O’BRIEN: I have a lot of really good setups and transition really smooth from one move to the other and when one gets shut down I can usually slam that on, I also have really long legs and most people don’t realize how strong they are until they get in my guard.

PRO MMA NOW: Do you hold a belt in BJJ and have you competed in any grappling tournaments? Some fighters like to do that just to help tune their skills, do you have any interest in that?

T.J. O’BRIEN: I have a blue belt but I gave up on gi jitsu about three years ago. I haven’t competed in any jitsu tourneys but have done some wrestling tourneys for the fun of it.

PRO MMA NOW: Your upcoming opponent is Paul Kelly – and he has no wins via triangle choke. Does knowing that, give you any satisfaction?

T.J. O’BRIEN: Not really. I see that he doesn’t have any losses by triangle choke so I would like to be the first.

PRO MMA NOW: Kelly is a UFC veteran at this point and he’s fairly well-rounded. How do you see yourself matching up with him on the ground and standing?

T.J. O’BRIEN: I think on the ground is going to be where I have the advantage but I’m sure he’s confident with his ground and pound, I have really been working on my stand up and like in every fight I will look to use my 78 inch reach as an advantage.

PRO MMA NOW: Do you feel your best chances of winning are to get the fight to the ground, or do you think you are perfectly ready wherever the fight is?

T.J. O’BRIEN: I can win anywhere but on the ground is obviously where I’m most comfortable. 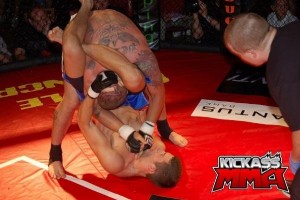 PRO MMA NOW: Finally, I wanted to ask your opinion on a couple of fights on the card. First, the main event: Lyoto Machida vs. Rampage Jackson. How do you see that fight going? And then BJ Penn vs. Matt Hughes – What are your thoughts on that rubber match and who do you see winning?

T.J. O’BRIEN: I have Machida wining and BJ has always been one of my heroes but if he’s really at 165 right now like he says he is he’s going to have a lot of trouble.

PRO MMA NOW: Thanks for talking with us T.J. and best of luck on Saturday. Would you like to thank any sponsors or send any shout outs?

T.J. O’BRIEN: Thanks to Punishment Athletics for sending my some sick clothes and Insanity Fight Wear for all their support. Thanks to Nutrishop and Cardio Force for keeping me in great shape.