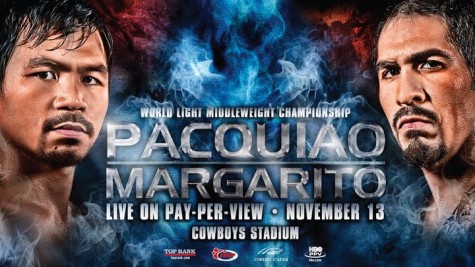 Round 1: Manny is the heavy favorite. Margarito has a 17-pound weight advantage; keep that in mind. Body shot by Pacquiao. Another body shot from Pacquiao. Margarito has to take a drug test after the fight. There is some controversy that he may have drank some coffee or an ephedra based substance before the bout in the dressing room. Left hand by Manny scores. then a body shot and a quick joab. Uppercut from Manny. Margarito just hanging by  using mostly jabs so far, nothing landing big. Manny using better combos throughout the round and Pacquiao takes the round easily.

Round 2: Margarito’s height advantage could play a difference. Body shot and a combo from Margarito and Manny fires back with several shots. Pacquiao much faster with his punches. One, two, three from Pacquiao. Jab lands from Margarito solid. Nice body shots as Manny gets inside. Big left from Manny knocks Margarito off balance just a bit. Keep in mind I’m not typing every single blow here but just a summary. Manny gets the round.

Round 4: Margarito working the jab, lands a couple hooks to the body. Manny with five and six fight combos. Right hook from Pacquiao. One, two, three, four from Pacquiao all connecting solid to the face of Margarito. Big body shots and Margarito is hurt. Pacquiao  hit him in the body with hard combos, then followed up with shots to the head. He’s so fast and never stops, never stops the assault. Margarito got his feet back but Pacquiao took the round big time.

Round 5: Margarito’s right eye looking bad. One two three power shots from Pacquiao land. Margarito has him against the rops and lands a few good shots but Pcquiao answers back with several pinpoint shots, all finding their target. The last round was the most Margarito has ever been hit in a round according to CompuBox. Uppercut from Margarito as Pacquiao gets against the ropes. Pacquiao gets out and has slowed down the onslaught momentarily. Pacquiao staggers Margarito with a nice big power combo before the round ends. Another round for the Pac Man.

Round 6: Margarito’s right eye almost closed. Margarito moving forward with his jab, Pacquiao staying light on his feet, moving side to side and picking Margarito apart. He has Margarito chasing him now. Four punch combo from Pacquiao scores and he’s really using the footwork now, making Margarito work and Manny is doing more counter punching here. Margarito lands some good shots as he has Manny backed up. Pacquiao lands some big shots though and the crowd is on their feet. Margarito’s best round but I still give it to Manny.

Round 7: Pacquiao dances with some footwork, showing off a little now and  lands a power combo. Big body shot from Margarito, again. But Manny stops him in his tracks with more big combos, to the body and face. Five round combo from Manny. Manny’s hands just looking beautiful. Margarito’s size is the only thing keeping him in this fight. Another round for Manny.

Round 8: Manny’s accuracy, speed and power is just beautiful. Then you mix in his footwork and it’s crazy. Margarito has Pacquiao against the ropes and lands some good shots but Manny fights his way out and blasts him with more patented power combos. Margarito has him against the ropes again and lands a nice uppercut. Ref moves them to the center. Nice one two from Margarito. Right hook from Manny then a five punch combo. Both guys swing away as the bell sounds. Manny gets the round 10-9.

Round 9: Margarito’s eye looks horrible. Slow mo shows Manny getting hit with a big uppercut. The most punches Manny has ever taken in a fight was in the last round. And he still won it. And the guy out weighs him by 17 pounds. Margarito trying to walk Manny down but gets blasted. Manny staying light on his feet, moving  and his attack has slowed down a bit, maybe taking a little rest. He didn’t throw many punches at all that round and I would give that round to Margarito. Margarito’s eye is horrible.

Round 10: Doctor calls time to check Margarito’s vision. Manny looking more active now, attacking with three four and five punch combos, staying in the pocket. Right hook, right hook and Margarito backs him up, Manny stops him in his tracks with a huge right hook that smashes Margarito and he’s hurt. Margarito shakes his head and Manny smashes him some more before the bell. Another round for Manny.

Round 11: They might stop this fight. Margarito’s right eye is just about useless. they let it go. Manny  goes back to working on that eye. Manny popping him with a super fast right. No head movement from Margarito, he’s eating shot after shot. Manny looks at the ref as if to say, hwo much punishment do you want him to take? Ref stops it to look at his face and lets it go. Right hand from Margarito but his punches have no snap at all and Manny’s punches are exactly the opposite. Manny said something to him while hugging him it looks like. Manny smashes him with a few more before the round ends.

Round 12: Margarito only landed six punches last round. Pacquiao landed over  50. right hook from Manny. Body shot and four punches to the face. They are saying Manny is pulling his punches now and carrying Margarito, going to let him finish the fight. This is something you would never see in MMA … or maybe you would, but I think a lot less likely. Pacquiao  landing some big shots now. Pacquiao gets another round and should  win it unanimously.