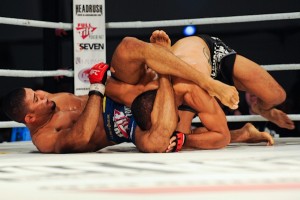 Douglas “The Phenom” Lima lived up his nickname with a scintillating performance that earned him the Maximum Fighting Championship’s world welterweight title at MFC 27: Breaking Point Friday night live on HDNet Fights.

Lima (16-4) fought through the grinding wrestling of Jesse Juarez in the opening two rounds and then let his submission skills go to work, transitioning from attempts at an oma plata to a triangle choke, and then eventually sinking in a fight-ending, picture-perfect armbar. Juarez (15-6) was forced to tap at the 2:36 mark of Round 3 before a sold-out crowd at the River Cree Resort and Casino, just outside Edmonton, Alberta.

For Lima, who hails from Atlanta, Georgia, it was his fifth straight win and capped an exhilarating 2010 campaign that saw him enter the MFC in grand fashion with a second-round submission win over Ryan Ford at MFC 26 and then take home the belt just three months later. Juarez, who was trying to become the third member of Team Body Shop to wear an MFC crown, had his nine-fight winning streak come to a screeching halt.

The championship glory wasn’t the only shining moment for the Lima family however. In the opening bout of the televised main card, Dhiego Lima (4-0) made his MFC debut a successful storyline when he dropped Bill Fraser (4-2) to the canvas with a one-punch knockout at the 2:36 mark of Round 2.

And just to put a bow on things for the Limas, the duo walked away with both the Submission and Knockout of the Night awards.

Ford (13-3) bounced back from his loss to Douglas Lima with a much-needed victory in his grudge match with veteran Pete Spratt. Despite having the home-town support, Ford got off to a slow start as Spratt (21-19) carried the action in Round 1, using his striking and some surprising takedowns. But Ford, who beat Spratt two years ago in a controversy-filled contest, found his rhythm in Round 2, finally getting Spratt down, pinning him in a corner, and alternating between ground-and-pound and submission attempts before finishing the fight at the 3:07 mark with a bar-arm choke.

The three other fights on the main card all went to the judges’ scorecards.

In a lightweight tussle, “Ragin” Kajan Johnson (18-11-1) was all over Ryan Healy from the get-go, proving he had an impressive all-around game plan that combined some effective striking, grappling, and takedowns. Johnson, who now fights out of Las Vegas, Nevada, nearly ended the fight in Round 2 when he took Healy (19-9-1) down hard face-first to the mat, but the hard-nosed Portland, Oregon, product showed his grit to force the fight the distance.

Popular heavy hitter Dwayne “D-Bomb” Lewis of Fort McMurray, Alberta, inched forward in his quest for a shot at the MFC light heavyweight crown as he slipped past Razak Al-Hassan with a split-decision verdict. Lewis (13-5) was unable to fire of his strikes as he would have liked but did just enough to pull out the win over Al-Hassan (11-3), taking it 29-28, 28-29, 29-28.

Though he took the fight on short notice, Rodney “Sho Nuff the Master” Wallace (10-3) was rewarded for his gritty effort. Wallace, who fights out of Charlotte, North Carolina, was the more active striker and scored a handful of takedowns to walk out with a unanimous decision over David Heath (16-7). The judges favored Wallace at 29-28 across the board.