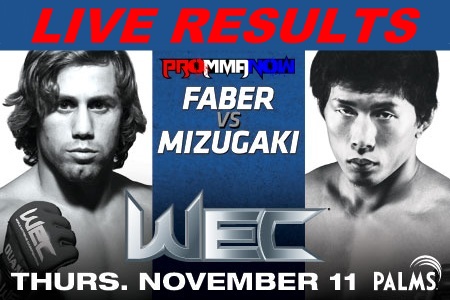 “WEC 52: Faber vs. Mizugaki” takes place this evening at the Pearl at the Palms Casino Resort in Las Vegas, Nev. In the main event, longtime top-10 ranked featherweight Urijah Faber moves down to bantamweight to take on top-10 ranked 135-pounder Takeya Mizugaki.

“WEC 52: Faber vs. Mizugaki” airs live tonight on Versus beginning at 9 p.m. ET/6 p.m. PT. ProMMAnow.com will provide live results and play-by-play commentary of the event. An archive video of the WEC 52 weigh-ins and Q&A, as well as a live stream of the WEC 52 post-fight press conference can be viewed in our UFC Room.

Be sure to check out the ProMMAnow.com WEC 52 staff picks for a complete preview and to get our predictions on tonight’s fights.

Round 1 – Got me some good hazelnut coffeee and I’m ready to go… Page attacks first with punches and a head kick, flying knee to the face and Page goes for the takedown but ends up on his back, gets to his knees, then his feet where he grabs a Thai clinch. Johnson breaks free, leg kick. Big right and a knee from Johnson but Page judo throws him to the ground and ends up in side control, landing knees to the body. Johnson’s back is to the cage trying to get up. Page pulls him down flat. Johnson with elbows from his back. Page in half guard. Page gets full mount. Bad spot for JOhnson, but he recovers half guard, gets to his feet. Page throws him down again but Johnson gets up and takes Page down. Page gets up, eats a knee to the body and Page has a body lock. Johnson punches him but Page slams him very hard. Johnson almost gets to his knees, but Page puts him back on his back. Johnson landing elbows and punches from his back. ProMMAnow.com scores the round 10-9 for Page.

Round 2 – Head kick from Johnson. Johnson throws punches, Page fires back and then another head kick. They clinch. Page shoots, gets Johnson down with a single, pushes him against the cage. Johnson gets up and free. Johnson lands a shin right to the groin of Page and he’s down and time is called. Here we go. Feint by Page, again and he eats a leg kick. Johnson light on his feet, leg kick again. Johnson ducks under Page’s punch and puts him on his back with authority. Page sits up against the cage, gets to his feet, Johnson changes levels and gets the takedown. Johnson on top in half guard. Page with butterfly guard, Johnson tries to mount but Page recovers full guard. Johnson still on top using ground and pound; a couple of nice punches getting through. Nice elbow from Johnson and the round nears the end. Page tries to get up but Johnson keeps him down. ProMMAnow.com gives Johnson the round 10-9.

Round 3 – Johnson drops Page with a big shot. He starts with the ground and pound from side control, landing elbows and punches. They’re saying the year layoff may have hurt Page. Page has butterfly guard, holding onto Johnson. Page looks tired. Page gets to his knees but Johnson is holding his neck, goes for a guillotine, pulls it tight and ends up withguillotine from mount, it’s tight and Page taps out.

Round 2 – Urijah Faber  backstage watching intently. Overhand right from Benavidez. Fabiano slips to the ground from a kick and Benavidez attacks with kicks to the legs. Fabiano gets up shoots, and Benavidez jumps into a guillotine. Very tight, Fabiano slips out. Benavidez locks it back on after some readjusting, one arm is in, and Fabiano escapes and is on top in half guard. Fabiano moves to side control. Benavidez gets to his knees and gets up. Locks on another guillotine, no arm in this time and Wagnney Fabiano taps out. That’s a huge win for Benavidez over a very skilled BJJ player. Faber cheers big in the back.

Round 1 – Rivera, undefeated at  5-0, is making his WEC debut, taking this fight on two weeks notice. Mazzagatti looks crazy, shaved his mustache. Head kick from Koch. Misses with a leg kick. Using a jab, lands a nice body kick. Koch with a jab keeping the distance. Rivera swings big, eats a leg kick. High kick from Koch and Rivera lands a leg kick. High kick from Erivera, hab from Koch. Koch drops Rivera with a solid head kick. He leaned over to one side causing Rivera to drop his hand and Kock puts his shin right against Rivera’s head and this fight is over. Koch follows with a couple punches but they are not needed as the ref jumps in immediately.

NOTES: Koch said that was an Anthony Pettis kick, said Pettis taught him that. They are roommates.

Round 1 – High kick from Mendes catches Javier’s shoulder. Vazquez shoots and ends up on his back taking kicks to the thighs. Javier jumps up. Inside leg kick from Vazguez. Mendes with the takedown and Vazguez throws an inside low kick. Mendes inside the full guard and Javier pulls rubber guard. Javier with elbows. Mendes picks him up and slams him. Vazquez opens his guard, staying very active from teh bottom. Nice elbow from Mendes. Vazquez with rubber guard, still landing some elbows. Mendes grinding it out with 45 seconds to go in the round. Nice elbows from Javier but Mendes staying active from the top too. Vazquez  eating some punches as  Mendes postures up. ProMMAnow.com scores the round 10-9 for Mendes.

Round 2 –  Leg kick Mendes. Flying knee scores for Mendes, knee right to the head and Javi pulls guard and goes right to rubber guard. Mendes picks him up slams him and that makes him release the rubber guard. Javier working from the bottom with punches. Mendes with punches and body shots from the top. Mendes postures up, lands some nice punches and Javi boxes his ears. Javi constantly boxing the ears, over and over from his back. Up kick from Javi as Mendes stands up. Javi kicks at Mendes’ knee. Mendes does a forward flip and lands on top of Javi. There’s a scramble and Mendes ends up on top inside Javi’s guard. Elbow from Mendes. Javi back to boxing Mendes’ head with palm strikes as Mendes is in his full guard. Herb Dean stands them up. Mendes misses with a high kick. Javi tries to catch him with some punches but the bell sounds. ProMMAnow.com scores the round 10-9 for Mendes.

Round 3 – Big inside leg kick from Javi. Javi swings big with a left. Mendes gets the takedown. Javi lands two sharp elbows from his back. Mendes stands up, hovering over Javi, and Javi pops up to his feet. Right hand from Mendes. Big head kick from Mendes rocks Javier and Mendes follows it up with a takedown. Mendes on top in half guard. 2:45 left in the round. Nice short quick elbows from Mendes. Ref stands them up. I don’t agree with that. Mendes lands a right, attacks with more shots and Javier just lays down on his back. Javier has a cut under his eye. Mendes inside full guard landing some nice punches to the body, sees the blood, hammers Javier with an elbow and the blood is now covering the side of Javier’s face. Mendes pulls rubber guard and Mendes grinds it out with punches to the ribs. ProMMAnow.com scores the round 10-9 and the fight 30-27 for Mendes.

NOTES: Mendes improves his record to 9-0

Round 1 – Leg kick misses from Mizugaki. Right hand scores for Faber. Elbow from Faber. Urijah getting the better of the stand up to start out. Clinched against the cage. Shoulder strike from Mizugaki. Knee to the body from Faber. Still clinched, fighting for position. Faber fires off a big elbow that scores. Mizugaki gets underhooks and turns Faber to the cage. They separate and square up. Body shot from Faber as Mizugaki swings. Faber pushes him into the cage, looking for the takedown. Mizugaki turns Faber to the cage. Faber spins around takes Mizugaki’s back in the air as he’s standing, they drop to the canvas and Faber has a body lock with his legs. 20 seconds left. The ref checks to see if he’s asleep and he’s as stiff as a board as Faber rolls off. He may have been out for a good ten seconds. Great bantamweight debut for Urijah Faber. Props to Mizugaki for not tapping. Mizugaki is up and is okay.