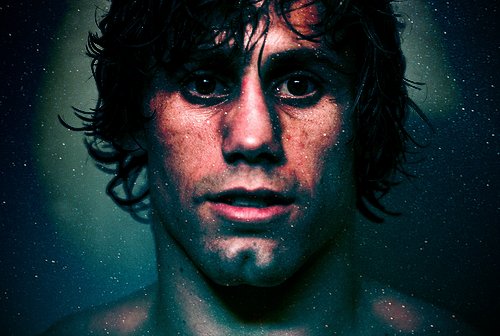 LAS VEGAS – A new chapter in the career of Urijah Faber just started with a bang. “The California Kid” in his debut at bantamweight, wasted little time in showing that he is still one of the best fighters in the world, making short work of the very tough and durable Takeya Mizugaki at 4:50 of the very first round.

The fight was pretty much even up to that point, as both guys scored with crisp striking, and engaged in very entertaining exchanges before clinching against the cage. Mizugaki showed off his wrestling and take down defense, defending well against the take down with his back against the cage, but it was a mistake he made as he reversed positions that spelled the beginning of the end for the Japanese contender.

As Mizugaki circled and put Faber’s back against the cage, he gave up his neck, and Faber seized the opportunity to go for a guillotine. As Mizugaki dropped to his knees to defend, Faber quickly spun and took his back, forcing Mizugaki to stand to defend.

Faber immediately jumped on his back, locked up a tight body triangle, and the fight against the clock began as time wore down on the first frame. Faber sunk in the rear naked choke with under a minute to go in the round, while Mizugaki refused to tap and fought to survive to the bell, but went limp before time expired, as he was left unconscious from the choke.

“You know, the Japanese, they have that fighting spirit, and this guy is known for being a guy that goes to the very end,” said Faber. “So I knew I had to do something drastic and put him out, so I did.”

Chad Mendes has been called one-dimensional by some, but he showed improved stand up skills to compliment his perfectly time take downs in a dominating win over Javier Vazquez.

Vazquez failed to find his timing on the feet, hesitating at times, while Mendes fired off strategic punches and kicks setting up his unstoppable take downs. Vazquez utilized the rubber guard to control the posture of Mendes throughout, but spent way too much time on his back over the course of the bout.

The second round saw Mendes establish control and domination and by the time the third frame was under way, just the threat of a take down gave Mendes all the space he needed to score points on his feet, as he landed a flush high kick to the face of Vazquez after feinting a level change.

The kick set up yet another take down, and once the fight was on the ground, Mendes proved to be too much for the very game Vazquez. Vazquez proved to be a tough opponent, but in the end the judges all saw it the same way, scoring the bout 30-27, all for Chad Mendes. The win keeps Mendes perfect at 9-0 overall, and 4-0 in the WEC, and moves him one step closer to a title bout.

If Sportscenter added top 10 plays on their show tonight, Eric Koch would be on the list. The Duke Roufus product showed off his kicking leg like he was trying out for an NFL place kicker spot, setting up and delivering a brutal high kick that dropped Francisco Rivera where he stood.

Rivera fought to survive, but Koch pounced on his downed opponent and landed several big punches before the referee stepped in for the stoppage, swiftly ended the WEC debut of Francisco Rivera just 1:36 into the bout.

Persistence is the key, and Joseph Benavidez showed just how persistent he can be when going for a finish. After a first round that saw both guys test out the stand up game, the second round would take place mostly on the ground, where it would seem that Wagnney Fabiano would have a decided advantage. As it turns out, the ground game was all Benavidez.

Benavidez opened the second frame with a leg kick that sent Fabiano to the mat, and instead of backing up and making Fabiano stand, Benavidez, true to form, attacked him on the ground. Fabiano found some space earning a nice sweep and looked for a take down of his own, but Benavidez seized the opportunity to go for one of his patented guillotines.

Fabiano would escape, but time after time, Benavidez went for different variations of the guillotine, and finally in the second round, Benavidez locked up the guillotine one more time, and with Fabiano trapped in his guard, the brazilian jiu jitsu black belt was forced to tap.

Damacio Page was the bigger man with more hype behind him in his bout against Demetrious Johnson. But somebody forgot to tell “Mighty Mouse” to be impressed.

Johnson offset his lack of size with blazing speed, and refused to play the stand up game with the dangerous Page. Instead, Johnson closed the distance and earned multiple take downs, controlling the bout for most of the fight.

By the time the third round was under way, Johnson looked to be the much fresher fighter, and after a failed take down by Page, “Mighty Mouse” locked up a guillotine from the mount, forcing Page to tap at 2:27 of the final stanza.