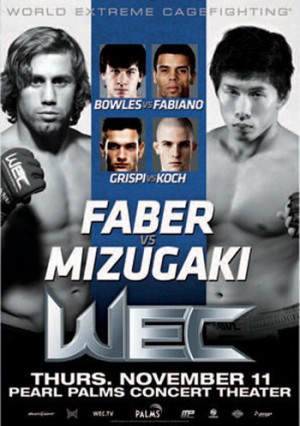 LAS VEGAS – The fighter weigh-ins for “WEC 52: Faber vs. Mizugaki” took place today at the Key West Ballroom at the Palms Casino Resort in Las Vegas.

Main event competitors Urijah Faber and Takeya Mizugaki both weighed in at the 136-pound bantamweight non-title fight limit. It was Faber’s first time dropping to bantamweight after spending years as one of the top featherweights in the world.

The only fighter not to make weight on his initial try was Zack Micklewright. He tipped the scales at 158 pounds, two pounds over the lightweight non-title fight limit. He was given one hour to cut the excess weight or face penalty, and he succeeded in getting down to 156 pounds.

“WEC 52: Faber vs. Mizugaki” airs live Thursday night on Versus beginning at 9 p.m. ET/6 p.m. PT. ProMMAnow.com will provide live results and play-by-play commentary of the event. An archive video of the WEC 52 weigh-ins can be viewed in our UFC Room.