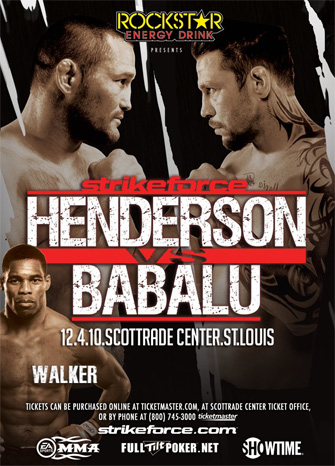 Strikeforce announced the addition of three new preliminary card bouts for their “Henderson vs. Babalu” card scheduled for Dec. 4 at the Scottrade Center in St. Louis, Mo.

Bettega, Martytniouk and Cummins are all part of the EA Sports MMA and Sherdog fighter exchange training program that pairs up-and-coming fighters with a Strikeforce training mentor.

Bettega trained with Ronaldo “Jacare” Souza, Martytniouk was paired up with Gegard Mousasi and Cummins worked with Jason “Mayhem” Miller. And on Dec. 4, we will see just how much these young athletes have learned.

So far, here is how the “Henderson vs. Babalu” card is stacking up: