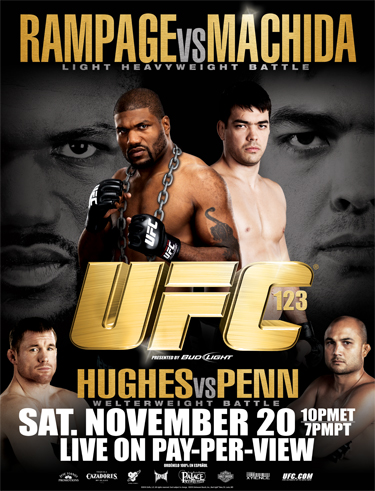 The UFC has confirmed all bouts for “UFC 123: Rampage vs. Machida” scheduled for Nov. 20 at the Palace of Auburn Hills in Detroit, Mich. In the main event, former UFC light heavyweight champions Quinton “Rampage” Jackson and Lyoto “The Dragon” Machida will face off in a bout that could put the winner right back in line for another title shot.

In their first meeting, at UFC 46 in 2004, Penn scored a first round rear-naked choke submission over Hughes. Then two years later at UFC 63, Hughes got his payback by stopping Penn with punches in the third round. Now four years since they last met, and six years since they first battled, and as the two legends near the end of their careers, they are ready to go at it one final time.

There are three fighters making their UFC debuts at UFC 123. Chute Boxe’s Maiquel Jose Falcao Goncalves and undefeated Edson Barboza, both from Brazil, as well as submission phenom T.J. O’Brien, will all enter the UFC Octagon for the first time at UFC 123.

Also, making his return to the Octagon is long time UFC veteran Karo “The Heat” Parisyan. After being released from the UFC in 2009 and winning a fight in Australia, the UFC brass has decided to give “The Heat” another chance.

Tickets for “UFC 123: Rampage vs. Machida” start at $50 and are available through Palacenet.com, at The Palace of Auburn Hills box office, Ticketmaster.com, charge-by-phone (800.745.3000) and all Ticketmaster retail locations.

“UFC 123: Rampage vs. Machida” will air live on pay-per-view on Saturday, Nov. 20, starting at 10 p.m. ET/7 p.m. PT. ProMMAnow.com will provide live results and play-by-play commentary for all the action.