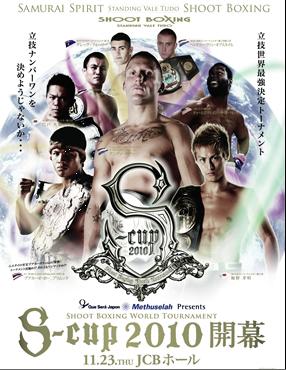 Two time K-1 World Max champion and one of the most popular Muay Thai fighters on the world, Buakaw Por. Pramuk has filled the final slot for the upcoming Shoot Boxing S-Cup 2010, scheduled for Nov. 23 at JCB Hall in Tokyo, Japan.

Other fighters competing in the tournament include three-time S-Cup champion and two-time K-1 MAX champion Andy Souver, who will be defending his 2008 S-Cup title. Also, Japanese Shoot Boxing legend Hiroki Shishido, and the wild man from America, Charles “Krazy Horse” Bennett will be in the tournament.

Many are predicting that Souwer and Buakaw will likely face each other in the finals.

In addition to the tournament, there will be a “super fight” between Shoot Boxing Japan super featherweight champion Tomohiro Oikawa and DREAM veteran Daiki “DJ.taiki” Hata.

The first round tournament match-ups will be announced next week, but here is a complete list of the S-Cup 2010  competitors: