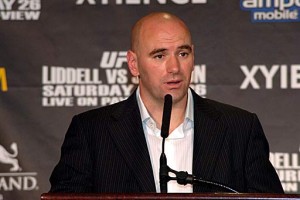 With the 2010 elections in the rearview mirror, it’s tempting to speculate where mixed martial arts now stands in the political landscape. After all, its legality is still relatively new and one large state with a rich tradition in sports and boxing has refused to get on the bandwagon (New York).

Several theories and ideas have been thrown out there, and the recent push by the UFC brass to support embattled incumbent U.S. Sen. Harry Reid, D-Nev., escalated the amount of theories and guesswork the 24-hour news cycle craves.

To step back and bring a little more expert analysis into the debate, a political insider with experience working on MMA legislation discussed the politics of the sport with ProMMAnow.com, speaking on the condition of anonymity.

First we talked about this proclamation, that the UFC needs to reach out to the actual voters to get MMA on the path of legality and regulation in New York.

“Zuffa’s effort thus far, while noble and not cheap, is basically failed carpet bagging,” the article says. “Reilly is the de facto voice for New York against the Las Vegas-based Zuffa trying to change laws in his state.”

But is that really the case? Our insider talks about whether Zuffa is going the proper route to get things done in New York.

“Based on my experience, Zuffa would best spend its money on hiring an effective team of advocates to educate the few folks in Albany who are resistant to their business model, which I think they’ve done,” the source said. “It’s not a secret that getting legislation passed often takes three or four years or more. Rarely does it get done in the first year. The wheels of government turn slowly, as they say.”

The above column by Luke Thomas goes on to suggest that, even though Zuffa has hired experienced lobbyists, they’re somehow unaware of how the New York Legislature works and how bills get through a committee, thus giving Assemblyman Bob Reilly (D) the opportunity to take a stand and get some cheap publicity. Again, our expert disagrees.

“I think they understand exactly how the process works, and are dealing with a committee chairman who has preconceived, negative reactions to the business they want to have introduced and regulated,” the source said. “Again, that process takes time. I think it’s an education process.”

Is Silver a powerful man in New York? Absolutely. But he hasn’t taken a public stance on MMA and their being political allies — not all that shocking since they’re in the same political party — doesn’t mean Silver will go one way or the other. Chances are he isn’t even particularly aware of the issue as New York tries to close a multi-billion budget gap in a state with powerful unions but a populace not in the mood for higher taxes.

“I doubt that’s the case,” our source said on the possibility that Silver is an obstacle in the process. “We’re not talking about an overhaul of the telecommunications industry or loosening regulations on electric utilities. I would be very surprised if Speaker Silver is even aware of this issue.”

And for Reilly, it’s questionable whether he would want to waste his political capital with the speaker on MMA. If you look at where Reilly’s campaign contributions come from, a large bulk come from the state’s Democratic campaign committee, while much of the rest comes from unions. If you look at the influence of money — something Reilly brought up in an interview with HDNet, where he painted himself as a crusader against the Zuffa lobbyists pouring money into their effort — Reilly would have to answer to the party establishment and the unions. I doubt either care about his MMA ramblings.

And why did Zuffa get so involved in the Reid race against challenger Sharron Angle? Were they channeling their influence with younger voters, as Jake Rossen suggests? Maybe not.

“Harry Reid is a big supporter of the UFC, and the UFC returned the favor,” the source said. “Did the UFC’s support have anything to do with Reid’s win? The numbers certainly don’t show that. Reid won with females — not the UFC’s demographic — by eleven points. He did surprisingly well in rural areas. The fact is that an opponent stronger than Angle, such as Danny Tarkanian, would’ve beat Reid, and Dana White and the UFC would not have been able to stop it.”

MMAFighting’s Mike Chiapetta also gave his thoughts, including Zuffa’s $75,000 contribution to now-Gov. Andrew Cuomo’s campaign. And, as he points out, Cuomo and Silver aren’t best of friends, nor has Silver been easy to work with for those in the governor’s office. Whether they butt heads on the issue of MMA seems unlikely, but enlisting Cuomo’s support was definitely a shrewd move.

“I think what they did is put the issue on the Governor’s desk,” the source said. “It wasn’t there under previous administrations. Does it make it a top priority for him? Of course not. But coming into office he’ll be aware of it, and if it needs a little push over the edge to get it done, he’ll be able to deliver.”

There has also been speculation about Zuffa’s use of lobbying on Capitol Hill in D.C., and whether that means they have a concern about federal legislation coming down the pipe to regulate MMA.

“I’m not aware of any federal regulations related to MMA in the works, nor can I imagine any,” the source said.

Given Zuffa’s status as a large corporation based in Nevada — a state without an income tax — doing business in multiple states every year and overseas, they have much more issues to advocate on behalf of than you might realize. Tax issues, for one. Simply put, having a lobbyist there doesn’t mean Congress has even remotely discussed a federal MMA bill. Nothing suggests they are.

Basically, for MMA to get the blessing of New York lawmakers, the UFC has to continue lobbying the key players — which they’re doing — and sell it as an economic development issue — which they have.

“This really needs to get turned into an economic development issue, in my opinion,” the source said. “Sell outs at Madison Square Garden, shows in Buffalo, or maybe even Albany. Get buy in from upstate legislators and also keep hammering that it will be good for New York City. Adding a giant event multiple times a year in New York is good for business.”

Other than that, it takes time and everything else is just speculative. So as much as media types feel pressured to find the answer before everyone else, we’ll have to just sit back and be patient.

3 thoughts on “An expert’s opinion on the politics of MMA in New York: be patient”