Coming to a live stream near you – M-1 Challenge XXII: Gallicchio vs. Zavurov airs to a worldwide audience 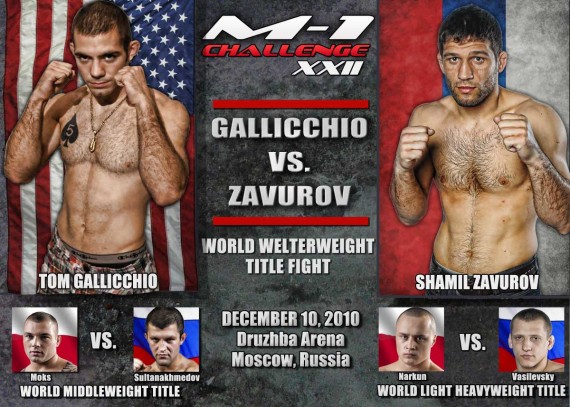 New York City, New York (November 4, 2010) – Fresh off the momentum of crowning their first-ever Lightweight and Heavyweight champions, M-1 Global is gearing up for its sophomore mega-event of 2010 with M-1 Challenge XXII: Gallicchio vs. Zavurov which goes down Friday December 10th from the Druzhba Arena in Moscow, Russia.

Fans worldwide will be able to catch the action LIVE online for free on the organization’s official website www.M-1Global.com starting 11:30am EST / 8:30 PST.

“Challenge XXI was our best event to date in 2010 and we’re building off its success,” says Evgeni Kogan, Director of Operations for M-1 Global. “The live feed played a significant role in the event’s positive reviews and because of this we’re making December’s M-1 Challenge XXII available via live, streaming telecast as well. The fans have spoken and M-1 Global is listening.”

Additional bouts to be announced
Free broadcast coverage of the entire M-1 Challenge XXII event will be available live to viewers worldwide on www.M-1Global.com.

With M-1 Challenge champions established in all five weight classes, a true contenders system will fuel events throughout 2011, driving M-1 Global’s growth as a leading brand in the US and international markets.

2011 includes a full slate of M-1 Challenge events held in the United States and Europe. These are the mega-event spectaculars where Champions defend their titles and contenders jockey for position. Feeding the contention system will be two Selection tournaments in 2011 with details being announced shortly.