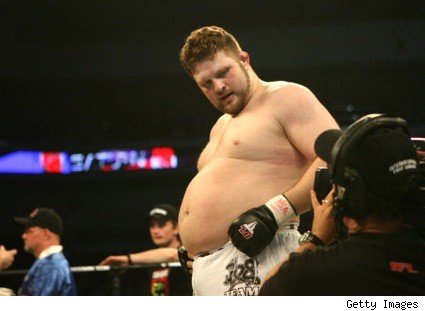 Longtime veteran and winner of The Ultimate Fighter Season 10, Roy Nelson, although not physically intimidating, is a fairly accomplished heavyweight. I know, I’m really going out on a limb there, right? Unfortunately, it’s worth mentioning since Jonathan Snowden believes Brock Lesnar is doing the MMA version of dumpster diving by saying he’d be interested in fighting Nelson, who was left without an opponent at UFC 125 when Shane Carwin had to pull out to get back surgery.

Instead of assuming Brock is trying to be a bully and find easy pickings, let’s look at the actual facts. If you go by any MMA rankings worth a crap, Nelson isn’t far outside of the top ten. For those generally considered inside the top ten, you have to take out the options currently in Strikeforce and remember that Carwin is out for several months thank to his injury, Junior Dos Santos is next for champion Cain Velasquez, and Velasquez just beat Lesnar’s butt.

Believe it or not, Nelson is about the best that’s left out of the bunch. And because of Carwin pulling out of the UFC 125 bout and the UFC’s inability to find Nelson an opponent, Roy is understandably frustrated. Rather than sit out for six to eight months, Lesnar saw an opportunity to get back in the cage and work his way back up the ladder.

Snowden chastises Lesnar for not taking the path of one Fedor Emelianenko, who wanted an immediate rematch with Fabricio Werdum at the earliest opportunity. But who in their right mind would call for a rematch with Velasquez after what just happened? Common sense would suggest Lesnar needs to earn himself another shot. He can’t fight Dos Santos and Carwin isn’t an option unless he wants to sit on his ass for awhile. And he could fight Antonio Rodrigo Nogueira, but Nogueira has looked like a shell of his former self lately and there is no word on when .

Maybe he could fight Frank Mir in a rubbermatch. But Brock utterly destroyed Mir last time around, and there is no reason to think the third fight would be any different given Mir’s lack of wrestling. Speaking of Mir, instead of demanding an immediate rematch with Carwin or Lesnar after taking a beating from both, he took a fight with Nogueira — someone he’d already beaten — and ultimately ended up fighting Mirko Cro Cop, who, at best, is on Nelson’s level at this point in his career (I don’t agree that he is). That silly Mir. What a bully looking for the easy way out. Am I right or what!?!?

Now back to Nelson. He went three rounds with the current top heavyweight contender in the UFC and he has a dangerous overhand right, strong chin, and great submission game. Not exactly a combination that Lesnar can just ignore and stroll past. Besides, of everything I’ve seen reported, Lesnar hasn’t refused to fight Carwin or Velasquez again, he just called for a chance against Nelson instead of Mir. Someone different. That’s fine with me. And wouldn’t Lesnar still fit into the bully category if he called out of accepted a fight with a guy he just smothered? Where’s the challenge in that unless you think Mir has somehow improved since then? And no, Mir’s snoozer win over Cro Cop doesn’t count as evidence.

Opinions are like stinky anatomical orifices, and yes I have them and they aren’t necessarily better than the next person’s. But the above article is either a lame Internet troll attempt to get attention — and if it is, at least be honest about it rather than pretending to be a provider of legit MMA news and analysis — or a painfully bad Op-Ed. Besides, if Lesnar wanted to go the Emelianenko route, he’d need to hire a shady management team that keeps him out of action for excessively long periods and fed the occasional diet of Japanese cans. Lesnar the bully came into the UFC and fought a former champion (Mir), a current champion (Couture), and the two most dangerous men he could’ve faced. Yeah, what a wuss.