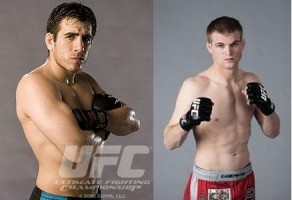 UFC lightweight contenders Kenny Florian and Evan Dunham will fight in the Jan. 22 UFC Fight for the Troops 2 main event in Fort Hood, Texas rather than on the UFC 126 card on Feb. 2, according to Heavy.com.

Florian initially announced his plans to fight Dunham during an episode of ESPN’s MMA Live, but later received an offer to fight featherweight kingpin Jose Aldo in his first fight at 155. However, Aldo’s management team turned down the offer.

Now 11-4 in his UFC career, Florian (13-5) has fought for the UFC lightweight title on two occasions and came up short each time, losing a decision to Sean Sherk and succumbing to a rear naked choke submission by B.J. Penn. Florian last competed at UFC 118 in a fight to determine the division’s number one contender but lost a decision to Gray Maynard.

Meanwhile, Dunham (11-1) suffered the first loss of his career at UFC 119, losing a controversial decision to Sherk. Nevertheless, Dunham impressed the fans and UFC President Dana White with his performance and solidified his status as a legitimate contender.

Other bouts rumored for the Jan. 22 card include: