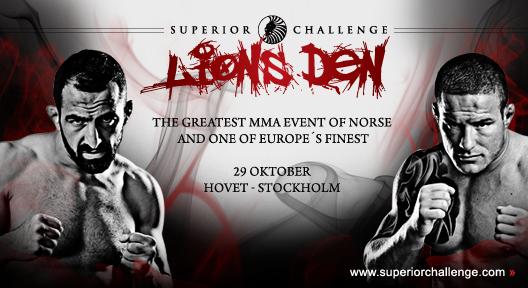 Hansen tapped Aziz out with an armbar. There was a lot of clinching in fight, but in the second round, Hansen took down Aziz, tried to submit him by kimura, but was unable. A takedown attempt from Aziz was countered by Hansem with a triangle, Hansen then transitioned to armbar and forced him to tap.

Thales Leites defeted Tor Troeng in second round. It was an easy fight for Leites, who showed a good ground game and a variety of submission attempts. Finally, in the second round Leites applied a rear-naked choke and forced his Troeng to tap.

In a light heavyweight championship bout, Chute Boxe fighter, Daniel Accacio defeated David Bielkheden by split decision. The bout was very close and full of action. Some felt the decision should have gone to Bielkheden.

In a lightweight championship bout, local fighter, Reza Madadi defeted Carlo Prater by unaminous decision. Reza is an undefeted Sweden MMA prospect with a nice ground game. He had several takedowns and out-pointed Prater on the feet. He deserved the victory.

All fight videos from Superior Challenge 6 can be seen on mmavideos.pl.