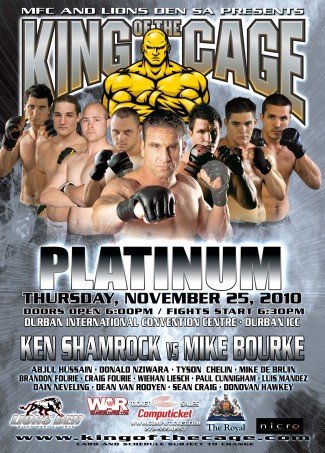 Durban, South Africa has successfully secured a first, not only for South Africa, but also for the African Continent.  On   November 25th, 2010, the ICC Durban will host one of the most highly anticipated Mixed Martial Art shows in 2010.

Ken Shamrock is one of the most widely recognized MMA fighters in the world. He is a legendary American Mixed Martial Arts fighter and a former professional wrestler. Ken Shamrock is best known for his participation in the Ultimate Fighting Championships, Pride Fighting Championship, the World Wrestling Federation, Total Nonstop Wrestling Action, and Pancrase. He is known around the world for his remarkable life story, which saw him turn from a troubled youth into the most recognized face in MMA.

This event is part of the International fight promotion King of the Cage which continues to promote hundreds of shows throughout the world, including 17 in the United States and far-reaching countries such as, England, Singapore, Hong Kong, Canada, and Australia.

King of the Cage is available on PPV / In Demand to over 50 million homes in more than 25 countries.  Platinum will be televised on local television as well as on PPV in 30 countries. Coverage includes Delay PPV airing nationally January 2011 on TVN, Dish and In-Demand.

Ken Shamrock will be featured as the main event on the “Platinum” card, fighting Mike “The Rhino” Bourke.  Bourke the 6’0’’ heavyweight has been in the cage against known fighters such as Tank Abbott and Mike Whitehead..   Shamrock, when asked about the fight and the upcoming event, “It’s an honor to go to South Africa – its home to the African Lion – the reason for the name Lion’s Den.  This is going to be one of the best things I’ve been a part of and it’s going to be fun!”

This event is a ground-breaking adventure for Ken Shamrock, Lions Den Ministries and his partners, not only in the fight scene but in terms of South African outreach programmes as well.

The newly developed and opened training facility, “The Lions Den South Africa” has combined with NICRO, (The National Institute for Crime Prevention and the Reintegration of Offenders), which is a non-profit organization working towards a safer South Africa.

Ken Shamrock is looking forward to huge success in South Africa both with MMA events, but more importantly building a sustainable program that encourages a healthier lifestyle for youth involving MMA gyms and the MMA community.

On November 22nd and 23rd Ken Shamrock will be visiting Durban’s South community to launch the project, spearheaded by Darian Smith from NICRO.  “Everyone involved in South Africa is extremely excited about the possibilities here including His Worship the Mayor of Durban, Councillor Obed Mlaba, who will be welcoming the team to Durban.”

The Lion’s Den is a mixed martial arts team and training facility founded in the early 1990s by UFC Hall of Famer Ken Shamrock and was the most dominant fight camp in the early UFC.  The latest Lion’s Den training center opened in Pinetown, South Africa in the summer of 2010 by owners David Verster and Mark Bristow.   Lions Den SA is a fully equipped MMA training center with top-notch instruction and an Elite South African fight team.