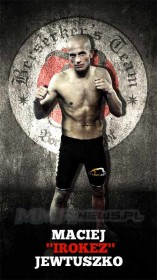 Polish Muay Thai champion and fast rising WEC lightweight prospect, Maciej “Irokez” Jewtuszko (8-0, 1-0 WEC) has broken his arm training for his next fight. Although not officially announced, he had been scheduled to fight Ricardo Lamas at WEC 53 in December. Now it looks like “Irokez” will be out of action at least until February.

In his World Extreme Cagefighting debut in August, the undefeted Jewtuszko was awarded the WEC 50 “knockout of the night” bonus for stopping Anthony Njokuani in the very first round with knees and strikes from the clinch.

Jewtuszko trains with Berserker’s Team in Szczecin, and his trainer, Piotr Baginski, is a BJJ black belt under Felipe Costa. Before signing with the WEC, Jewtuszko won several fights in Germany and Poland. He has defeated all of his opponents by TKO or submission.

Here is a highlight reel of Irokez: