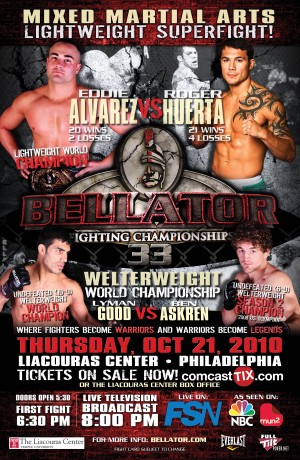 Top-10 ranked Eddie Alvarez (20-2) will take on former UFC superstarRoger Huerta (21-4-1) in a lightweight super fight. Also, someone’s “0″ will have to go as Bellator welterweight champion Lyman Good (10-0) puts his title on the line against wrestling phenom Ben Askren (6-0).

Round 1 – Askren gets the takedown. Good eventually reverses and Askren goes for a armbar. Good escapes. Askren ends up putting good on his back again, gets full mount. Askren goes for an arm triangle but Good reverses and ends up on top inside full guard. ProMMAnow.com scores the round 10-9 for Askren.

Round 2 – Askren shoots right away. Nice sprawl by Good. Knee by Good and a punch but Askren gets the double leg and puts Good on his back. Good with punches off his back and an up-kick. Askren gets to side control. Askren gets full mount. Lands some elbows and punches to the body. Looks like he’s trying to set up an arm triangle. Askren still in full mount, throwing punches here and there, maintaining control, but not doing much damage. Ref warns Askren to watch his fingers in the eyes. Askren lands some punches as he sits up. 40 seconds to go. Good throwing punches from the bottom but does not put much effort into escaping. Easy round for Askren 10-9.

Round 3 – Askren gets the takedown immediately, inside full guard. Askren postures up with punches and passes to side control and then full mount almost effortlessly. In less than one minute he was in full mount. Askren with slow methodical ground and pound. Nothing too aggressive, strong, or smashing, just a steady controlled beat down. Askren lands several little short elbows. Askren completely dominating this fight. Good has big mouse under his eye. The crowd starts to boo at the lack of excitement. Askren gets the round again easily 10-9 and we go to the fourth.

Round 4 – Good lands a combo and sprawls the takedown. Askren with a knee but eats an uppercut and a right hand, but Good ends up on his back once again. Askren in half guard. Good apparently having trouble with his left eye and said he can’t see out of it. Askren moves into full mount. Askren landing punches from the mount and elbows. Referee Kevin Mulhall stands them up out of full mount. Terrible stand up. Good with a right to the body. Adkren shoots, gets stuffed. They tie up for a moment, but square up again. Askren with another shot, gets a single leg eventually. That stand up from full mount was uncalled for. Askren right back into full mount. Good recovers with butterfly guard but Good is landing punches and Good punches from his back. The crowd boo’ing. Askren’s ground and pound looks weak but he gets the round 10-9.

Round 5 – Good lands a left jab and a left hook. Good needs to put Askren away to win. He stuffs a takedown attempt from Askren. Good lands a nice left. Askren shoots, gets stuffed but Askren stays in the shot, grabs a single and puts Good down on his back and inside his full guard. Askren stands up for the transition. Sits back into the guard and they exchange punches on the ground. Askren stands up and eats a big up kick that rocked him. Good locks in a very tight triangle. Good tries to transition to an armbar and Askren escapes. Very bad mistake by Good. Askren gets to the full mount and lands a few punches as the fight nears the end. Good punching from his back. Askren rolls off and looks spent. Askren should get the round 10-9 and the fight 50-45.

This would be a huge redemption for Roger Huerta if he could possibly defeat the Bellator lightweight champ Eddie Alvarez, especially in his hometown. Huerta lost a unanimous decision to Pat Curran back in May.

Round 1 – Leg kick for Alvarez. Again. Nice right by Eddie. Big leg kick from Alvarez that rocks Huerta. Alvarez smells blood and lands a harsh combo of punches. Huerta was limping on that leg. Alvarez gets him against the cage and lands more shots. Big right hand by Huerta as it moves back to the center of the cage. Leg kick Huerta. Again. Big uppercut by Alvarez and Huerta fires back. Alvarez gets a takedown but Huerta right back up. Nice left from Alvarez. Inside leg kick from Alvarez, then a right punch. Uppercut from Alvarez and Huerta lands a left hook. Big right by Alvarez. Alvarez gets a takedown but Huerta right back up. Nice right by Alvarez then a big uppercut, another uppercut. Huerta drops to his knees with his back to the cage. Alvarez tries to take his back. Huerta gets back to his feet and up. They square up. Uppercut from Alvarez. Then a big knee. Huge right from Huerta drops Alvarez. Alvarez gets up and Huerta lands another shot two big right hands by Alvarez. Wow!! Beautiful fight. Great heart by Huerta.

Round 2 – Frankie Edgar in attendance. He trained with Alvarez for this fight. Big leg kick by Alvarez. Another one. Herta throws some kicks that miss. Huerta with a sluggish takedown attempt. Leg kick by Alvarez stuns Huerta. Big uppercut by Alvarez. He pushes Huerta to the fence then gets the takedown. Huerta is up and lands a shot. Leg kick again and a big punch from Alvarez. Body shot by Alvarez. Nice right by Alvarez. Alvarez is clearly the superior boxer here. Huerta’s left eye starting to close. Huerta gets drop with a leg kick. Alvarez lands more punches, picking Huerta apart on the feet. Leg kick Alvarez, then a big right. Another right and another from Alvarez. Huerta throws a combo but is way off. Huerta catches a leg kick and misses with a counter punch. Alvarez with a combo. Huerta catches a kick and puts Alvarez on his back. Huerta in full guard with 45 seconds left in the round. Huerta with some big punches and Alvarez gets to his feet but gets suplexed by Huerta. Alvarez gets up and taunts Huerta as he punches him with a few shots as the bell sounds. Alvarez 10-9.

NOTE: The fight has been stopped. The doctor has deemed Huerta unable to continue. His eye looks terribly swollen, but Jimmy Smith thinks it may be Huerta’s knee that caused the stoppage. Apparently, Huerta said before this fight that he emotionally couldn’t take another loss, making it sound like if he did lose, he may be considering retirement.