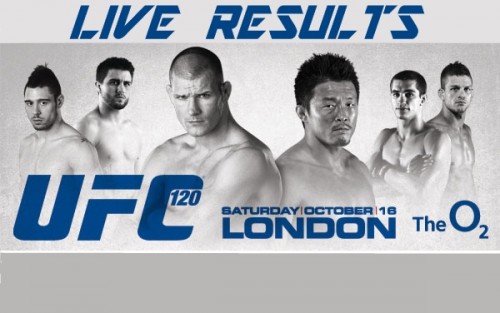 “UFC 120: Bisping vs. Akiyama” takes place today at the O2 Arena in London, England and is headlined by a middleweight clash between Michael Bisping and Yoshihiro Akiyama. The actual event starts about 1:00 p.m. ET but will not be broadcast here in the U.S. until 8 p.m. ET on Spike TV via tape delay. Hey, it’s free, whaddaya want?

ProMMAnow.com will start posting the results and play-by-play this afternoon coinciding with the LIVE event. If you are in the U.S. and don’t want to know the results prior to the Spike TV broadcast, then well, stay off the computer is all I can tell you.

Round 1 – Flying knee by Gustafsson, then a couple of leg kicks. Diabate with an inside leg kick. Gustafsson catches Diabate with a left and Diabate wobbles and gets taken down. Gustafsson has side control and eats a few shots as he tries to get up. Gustafsson in half guard now, maintaining control, landing left hands to the face. Diabate gets to his feet but pays for it. Gustafsson attacks with punches, grabs a single leg and puts Diabate against the fence. Tw minutes to go and Gustafasson drops Diabate again with some big punches. Diabate gets up but gets his mouth piece knocked out. Gustafsson’s striking is on point and is beating Diabate to the punch. Diabate lands a right but Gustafsson fires back, gets the takedown and has side control. One minute to go. Diabate is a four time Muay Thai champ and he’s getting worked on the feet here. Gustafsson punishing from half guard. ProMMAnow.com scores the round for Gustafsson 10-9.

Round 2 – Straight right by Gustafsson. Diabate lands a right. Gustafsson picks Diabate up and slams him on his back, landing in side control. Elbow and punches from Gustafsson, now in half guard. Diabate getting tea-bagged briefly, before getting mounted. Diabate gives up his back and Gustafsson gets a rear-naked choke locked on. Somehow Diabate escapes it momentarily, bleeding pretty badly, he escapes briefly but Gustafsson finds it again and Diabate taps out.

Round 1 – Browne is being much more aggressive. They exchange leg kicks. Browne scores a leg kick that knocks Kongo off balance briefly. Kongo comes forward swinging and gets caught with a big punch that rocks him. Browne tries to follow up and hits him again with a big one. Rogan says Kongo does not look stable at all. Browne grabs a Thai clinch and throws several knees as Kongo tries to block. They separate and square up again. Browne throws a combo as Kongo covers up, then lands a big body shot that knocks Kongo against the cage. Leg kick by Kongo. Big over hand right by Browne as Kongo covers up. Repeat. Kongo clinches and pushes Browne against the cage. Kongo with a big right before the bell. ProMMAnow.com scores that round for Browne 10-9.

Round 2 – By the way, I just picked up Arianny’s Playboy issue. Another note, the EA Sports MMA video game comes out this Tuesday. Big leg kicks from Kongo to the outside and inside. Nice one two punch from Kongo, again. Kongo clinches, pushes Browne against the cage and lands a couple of knees, one to the groin and the fight is stopped to give Browne time to recover. Browne goes for the body but eats a few punches to the face. Kongo looking much better this round, more aggressive. Kongo grabs a Thai clinch but gets pushed down to the ground. Kongo with a seven punch combo as Browne covers up, he clinches and pushed Browne against the cage and throws several knees to the thighs of Browne. More and more knees to the inner thigh of Browne. Ref calls for action. Ref restarts them in the center. Both guys swing for the fences and Browne clinches him and pushes him against the cage. Kongo reverses him and throws more knees to his thighs. Browne reverses the clinch but ref separates them, they immediately go back to the clinch and Browne pushes him against the cage, he gets the takedown at the bell. ProMMAnow.com scores that round for Kongo 10-9.

Round 3 – They clinch, Browne pushes Kongo to the cage. Ref warns Kongo for grabbing Browne’s shorts. Ref stops them and takes one point from Kongo. That is huge and will ultimately cost him the win. Pretty damn stupid Cheick. Cheick clinches and pushes Browne to the cage and grabs Browne’s shorts again and gets warned again for it. Big leg kick from Kongo. Kongo hunting, lands a body punch and a kick to the body. Kongo drops levels looking for the takedown. Kongo grabbing the shorts again, the ref pulls his hand off. Kongo clinching, pushing Browne to the cage. Ref restarts them. Two minutes to go. Leg kick Kongo. Browne looks tired. Kongo hunting. Six punch combo from Kongo. I think someone’s mouth piece flew out, Browne’s I think. Browne fires back with a big right. They clinch, Kongo looking for a takedown. Someone threw something into the ring, probably at Kongo for holding the shorts. Browne got a takedown at the bell. Rogan says he thinks Browne just won the decision. ProMMAnow.com scores that round 9-9 due to the point reduction from Kongo and scores the fight a draw at 28-28.

Round 1 – Leg kick Pyle. Pyle gets the takedown with a nice shot. Hathaway tries to get up using the cage. He gets up but Pyle holds on trying to get him back down. Hathaway turns around and gains the position advantage. They both stand. Pyle shoots, gets stuffed. Tries again, gets stuffed. Left hook from Pyle and a leg kick. Hathaway throws a couple of punch combo but is mostly blocked. Huge overhand right from Pyle clips Hathaway, he lands another right hand that clips, then a elbow. Hathaway is unfazed. Pyle with a left. Left hand from Hathaway. Pule with a body shot. Pyle’s shot gets stuffed but lands a knee and takes Hathaway down seconds before the bell. Pyle takes that round easily 10-9. It’s refreshing to see Pyle actually starting to live up to his potential here.

Round 2 – Leg kick Pyle. Pyle shoots, tries to trip Hathaway but can’t get it. They clinch against the cage, Hathaway with an elbow on the break and then a left. Pyle with a weak takedown attempt, gets stuffed. Hathaway with a knee, right hand by Pyle scores. Pyle shoots, they struggle, and Pyle tosses him over on his back, lands in side control and smacks Hathaway with a loud elbow and knees. Pyle traps Hathaway with a mounted triangle and is pounding him with punches. It’s a tight triangle and Hathaway seems done. It’s a triangle/crucifix, Hathaway can’t move and Pyle continues with punches. Pyle is at an odd angle so the punches aren’t terribly hard but it still looks terrible for Hathaway. Pyle landing nice elbows but Hathaway survives until the bell. ProMMAnow.com scores it 10-8 for Pyle and Hathaway has a big lump on his forehead.

Round 3 – Nice body kick from Hathaway. He shoots, can’t get it. Nice right from Hathaway, tries for a takedown but gets stopped. Pyle goes for a single leg, and gets it. He mounts but Hathaway wasn’t all the way down and uses the cage to get up. Pyle slings him back down and is in his full guard. Two-and-a-half minutes left in the round. This is pretty amazing considering what Hathaway did to Diego Sanchez. Pyle on top in half guard, using some good ground and pound landing nice punches. Nice elbows and punches with his left hand from Pyle, moves to side control and has Hathaway trapped against the cage. ProMMAnow.com scores the round 10-9 and the fight 30-26 for Pyle. That was a three-round mauling from Mike Pyle.

Round 1 – Holst  gets the takedown but Sass throws up a triangle. Holst gets free and slips out and stands up. Sass throws a flying knee but gets taken back down. Holst inside full guard. Sass lands some elbows and attacks with more submission attempts. Sass goes for a triangle and an omoplata. Finally Holst stands back up. They square up, spinning back kick by Sass misses and Holst gets the takedown. Sass attacks with a leg lock, then a heel hook. Holst defends, escapes and stands up. Sass throws a punch then shoots for a takedown but ends up on his back with Holst in his full guard. Sass lands some elbows from his back. Sass locks on a triangle/armbar, Holst escapes briefly but gets caught again and finally taps out.

Round 1 – Leg kick Condit. Again. Again. Again. Hardy lands a leg kick of his own. Condit with another leg kick. Big leg kick Hardy. Switch kick Condit. Hardy with a left hook. Misses with another and misses an overhand right and a head kick. Inside leg kick Condit. Punch exchange then a big leg kick from Hardy. Condit leg kick. Nice spinning back elbow but misses. Nice left hook lands for Hardy and Condit lands a leg kick. Condit lands a nice punch combo. Condit catchs a kick and lands one in return. Left hook by Hardy. Leg kick Hardy. Again. Condit with a four punch/kick combo. Condit knocks out Dan Hardy cold. Just like that. Unbelievable. Huge left hook drops Hardy then follows it up with a big right while Hardy is on the ground. They both threw left hooks at the same time but Condit’s got there first! Wow! Big win for Condit!

Round 2 – Nice left right from Akiyama. Leg kick-punch combo from Bisping. Akiyama catches a kikc and firs a punch. Both guys trade from the pocket, both guys landing some nice shots. Bisping gets poked in the eye and fight is stopped briefly. Nice right from Bisping. Again. Bisping with a lazy shot and gets stuffed. Big right hand from Bisping. Akiyama lands a nice right. Both connect with jabs. Akiyama with a trip attempt. Right punch lands from Akiyama and Bisping lands a kick and then a nice right. Nice left from Akiyama, then a leg kick. Akiyama somehow just ducks a spinning backfist. Inside leg kick from Bisping. Nice left from Akiyama. Bisping is getting the better of the stand up but Akiyama lands a big right just as I type that. Bisping is out scoring him though. Rogan says, “His work rate is intense.” Nice right hand by both guys but Bisping appears hurt. Akiyama pours it on as the bell sounds. Great fight. ProMMAnow.com scores that round 10-9 for Bisping.

Round 3 – Five minutes remain. Big swinging punch from Akiyama looking for the KO. He lands a right. Leg kick from Bisping.  Then a jab. Akiyama with a combo. Bisping scores with a nice head kick, then a big right. Akiyama is rocked. He scores with another right. Bisping lands a one two punch and wobbles Akiyama. Bisping wants this finish. He lands a groin kick and Akiyama falls to his back. Akiyama is not getting up. As they replay it, the sound is loud. Rogan says the way he’s rolling around I can’t see him coming back from this. … we wait… He’s okay to continue, the guys hug it out. Akiyama with a right hand. Akiyama catchs a kick, lets it go. Head kick from Bisping. Left jab from Akiyama. Two minutes to go in the fight. Nice one two from Bisping and again. Akiyama taunts him. Bisping lands another one two as Akiyama’s hands are low. One, two, three punch combo from Bisping. Another right hand from Bisping. Bisping continues to land combos. Akiyama still swinging hard but missing. They both swing away with ten seconds to go. ProMMAnow.com scores the round 10-9 and the fight 29-28 for Bisping. Bisping was much more active and just landed way more shots.