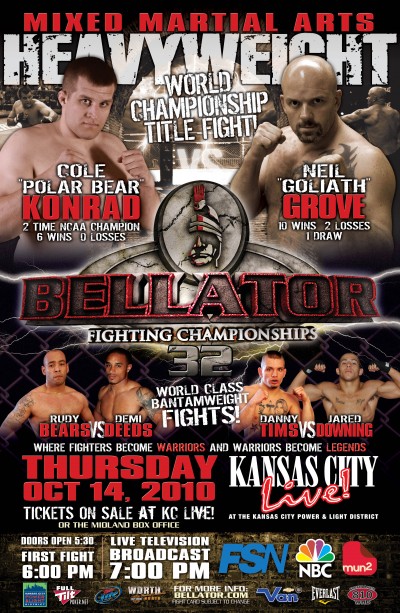 ProMMAnow.com will provide live results as they become available but our play-by-play will coincide with the FOX Sports Net taped delayed broadcast which starts at 10:30 p.m. CT.

Round 1 – Wallhead is on a seven fight win streak. Thomas with a leg kick but gets hit with a counter punch. Leg kick again from Thomas. Thomas shoots, gets stuffed. Thomas grabs a Thai clinch but can’t do anything with it. Wallhead gets a double and gets the takedown but Thomas pops right up. They square up, nice combo from Walhead, lands a nice punch. Thomas shoots, gets stuffed and lands a right hand. Leg kick from Wallhead. Body kick by Thomas scores, another one. Nice elbow from Thomas, he pours on the heat, smells blood, elbows, punches, kicks. They clinch against the cage. They square up again. Exchange of body kicks. Nice left from  Thomas, throws a head kick, mostly blocked. Clinch. Elbow to the face from Wallhead. Body kick from Thomas. Nice right by Thomas, then a big left hand to the body. Big leg kick from Wallhead. Body kick from Thomas. They exchange punches as the bell sounds. Close round, I give it 10-9 to Thomas.

Round 1 – Head kick from West is blocked. Makovsky catches West’s leg and puts him on his back. Makovsky inside his guard. West throws a bunch of elbows to Makovsky’s back. Nice punches from the top from Makovsky. West rolls to his feet. Leg kick from Makovsky then a front kick. Makovsky shoots and gets the takedown. Postures up lands a nice punch. Lays back on West. 45 seconds left in the round. West gets up. Makovsky lands a left. They meet mid air with kicks and Makovsky falls down after colliding with kicks again. Makovsky gets that round 10-9.

Round 2 – Makovsky catches a side kick and puts West down. West has full guard. Nice punches from Makovsky, West gets up. Makovsky lands a knee. Leg kick from West. Makovsky hunting. West catches Makovsky in the air and sweeps him to the ground. Makovsky has side control. West holding on tight looking for a stand up. Makovsky postures up, lands some punches. Lands a big kick to the legs while standing. Wes catches him arm in an omoplata, lands a few elbows but Makovsky pulls out. Makovsky gets the round 10-9.

Round 3 – West bouncing on his toes, throws some kicks that miss, lands a leg kick but gets it caught and taken down. Makovsky on top in half guard, moves to side control. Lands a grinding elbow. West gets up. Nice left from Makovsky. Leg kick from West. Makovsky with a beautiful takedown, gets side control, lands a few elbows. West has a cut over his eye from those elbows. Makovsky postures up, West gets full guard, pushes Makovsky off, and West rolls to his feet. Body kick from West. Makovsky shoots, West locks on an arm-in guillotine from half guard. West cranks is but Makovsky pulls out and is in full guard. West backward rolls to get out but Makovsky traps him against the cage as the bell sounds. Another one for Makovsky 10-9.

Round 4 – Makovsky catches West mid-air from a flying knee and puts him right on his back and lands in guard. Makovsky gets to side control, starts working with elbows. He stands up throws a big punch, knee to the body and West recovers full guard. West lands a few elbows to the head, gets warned for back of the head. Ref stands them up. Head kick from West is blocked. Left hand from Makovsky, then a leg kick. Makovsky shoots, gets stuffed, but keeps pushing and finally gets it. Makovsky attacks as West bicycle kicks. West in half guard, now full guard. West gets up. Flying knee from Makovsky and he gets another round 10-9.

Round 5 – West takes a low blow to the groin and time is called. West looks like he knows he is way behind. Body kick from Makovsky, he then grabs a leg and puts West down, lands in side control. West gets full guard, pulls rubber guard. Makovsky postures up. West bicycle kicks and Makovsky lays back inside full guard. Makovsky postures up with some shots, moves to half guard and side control, then stands up. West back rolls to his feet. They clinch. Foot stomps from West. They square up. West needs a finish to win. Makovsky gets the round 10-9 and the fight.

Round 1 – Grove’s only chance is to stop the takedown, which will be nearly impossible. Boom, Konrad puts him down but Grove bounces right up which is crazy surprising. Konrad lands two leg kicks. Grove swings a wild left hook and Konrad puts him down hard. Konrad has half guard,  softening him up with body shots. Konrad gets full mount as Grove holds wraps his arms around Konrad’s neck and holds on tight. Konrad postures up, and turns Grove’s ribs red with punches. Konrad  nearly rips Grove’s arm completely off it’s hinges, bending it complete backwards via keylock. Nasty nasty submission. Cole Konrad wins the very first Bellator Heavyweight Title. Now he and his training partner Brock Lesnar both have heavyweight titles.