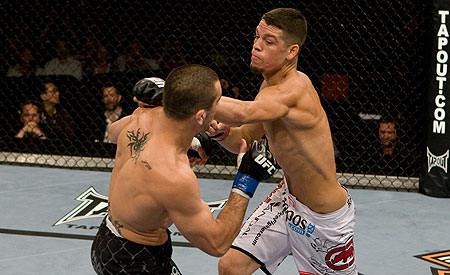 Nate Diaz‘s welterweight campaign will continue against Dong Hyun Kim. The two will meet at UFC 125. The card takes place on New Year’s Day at the MGM Grand Garden Arena in Las Vegas.

Multiple media sources were able to confirm that verbal agreements were in place.

After spending his entire career at lightweight, Diaz moved up to welterweight for UFC 111. On that night, he quickly dispatched former IFL standout Rory Markham. In his next welterweight fight, he scored a late submission victory over Marcus Davis after dominating the fight with his striking. The Cesar Gracie brown belt holds a 13-5 record in MMA.

Kim has shined in the UFC as one of the greatest prospect to ever come out of South Korea. He earned a shot in the promotion after putting together a 9-0-1 record fighting for DEEP and Spirit MC. In the UFC, he has defeated Jason Tan, Matt Brown, TJ Grant and Amir Sadollah.

In the main event of UFC 125, lightweight champion Frankie Edgar will defend his title against the only man to ever defeat him, Gray Maynard.