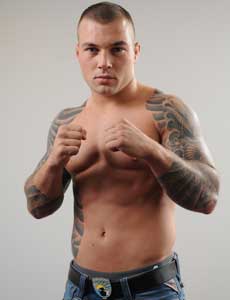 Rafal ‘Kulturysta’ Moks has earned himself the 2010 M-1 Selections Western Europe championship title with relentless pursuit in his tournament quest which started back in February of this year. With impressive performances throughout, the Berserkers team member needed just 4:19 to secure a fight-ending rear-naked choke over Serghei Popa in the quarter-finals and 4:56 to dispose of Danijel Dzebic thanks to a suffocating guillotine choke; both fights showcasing his ever improving ground game.

With the back-to-back wins, Moks secured himself a spot in the Finals against Ahmed Bayrak in a highly anticipated middleweight clash as part of a mega-card that featured 10 championship bouts. With high expectations, the bout delivered a back and forth, see-saw battle that proved to critics that Moks has a chin that can withstand power punches and that his thick, 5’8” frame is comfortable and confident fighting off his back; with the bout culminating with three full frames, his cardio was never came into question as the judges awarded Moks a unanimous decision.

With the victory, Moks improved to 5-2 and returned home to Szczecin, Poland with his Berserkers Team partners, who include fellow light heavyweight Selections champion, Tomasz Narkun, to begin preparing for the biggest fight of his life; Rafal ‘Kulturysta’ Moks will square off against Magomed “The White Wolf” Sultanakhmedov October 28th at M-1 Challenge XXI: Guram vs. Garner in an epic ‘striker versus grappler’ clash to determine the first-ever M-1 Challenge middleweight champion.

This talented Polish fighter will undoubtedly have his hands full with Sultanakhmedov, who many have compared to the great Mirko Cro Cop of the past. Should Moks reign victorious, he will cross the Atlantic Ocean in 2011 and bring his marketable ‘tatoo-appeal’ to North American fans in a title defence against American Selections champ, Tyson ‘The Anti-Hero’ Jeffries.