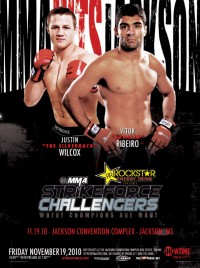 San Jose, Calif. (Oct. 4, 2010) – Lightweight star and Brazilian Jiu-Jitsu black belt Vitor “Shaolin” Ribeiro will take on Justin “The Silverback” Wilcox of Cincinnati in the headlining fight of a STRIKEFORCE Challengers event on Friday, Nov. 19, at Jackson Convention Complex in Jackson, Miss., LIVE on SHOWTIME® at 11 p.m. ET/PT, (delayed on the West Coast).

In a featured televised bout, unbeaten lightweight Ryan Couture (1-0) will face an opponent to be determined. The son of legend Randy Couture won his STRIKEFORCE and MMA debut with a 1:15, first-round submission (triangle choke) over Lucas Stark last Aug. 13 on STRIKEFORCE Challengers.

A special ticket pre-sale for “STRIKEFORCE Insiders” begins this Wednesday, Oct. 6, at 10 a.m. CT and ends Thursday at 10 p.m.  Fans can sign up to become an “Insider” at www.STRIKEFORCE.com.

Tickets go on sale to the general public on Friday, Oct. 8, at 10 a.m. CT at all Ticketmaster outlets, including the Coliseum box office and Be-Bop Record Shops, by phone at 800-745-3000 and online at Ticketmaster.com and STRIKEFORCE.COM.

Ribeiro (20-4) is a decorated submission expert and one of the top 155-pounders in MMA. He won the Brazilian Jiu-Jitsu World Championship four times, once as a purple belt in 1996 and three times as a black belt in consecutive years (1999-2001).

His 20 victories include 14 stoppages (12 by submission) and he has defeated, among others, such notable fighters as Joachim Hansen, Eiji Mitsuoka, and Mitsuhiro “The Endless Fighter” Ishida.

Ribeiro’s losses have come against some of the division’s most talented practitioners — Tatsuya Kawajiri, Gesias “GZ“ Cavalcante and, Shinya Aoki, in the DREAM Grand Prix finals July 20, 2009.

Wilcox (9-3), a 31-year-old former NCAA wrestling star and bodybuilder, has won his last four starts. In his most recent outing on March 26, he registered a unanimous decision over Shamar Bailey at STRIKEFORCE Challengers in Fresno, Calif.

A member of San Jose, Calif.’s Team AKA, one of the most fearsome fight teams in the world, Wilcox wrestled for Edinboro University of Pennsylvania where he befriended teammate Josh Koscheck, who turned his college wrestling buddy on to MMA and eventually brought Wilcox into the AKA family.

Wilcox’ first most noteworthy victory came on Aug. 30, 2008 when he scored a unanimous decision over Gabe Ruediger, a contestant on season 5 of Spike’s The Ultimate Fighter reality series.

The younger Couture is a member of the Las Vegas, Nev., based Xtreme Couture fight team. Before impressively winning his pro debut, the 28-year-old compiled an amateur record of 5-1-1 with all five wins coming by submission.

Couture, whose parents split up when he was in the sixth grade, spent his high school years in suburban Seattle.  With his father being a former wrestling coach at Oklahoma State University, Couture naturally developed into a talented high school wrestler.

Following high school, Couture enrolled in Western Washington University in Bellingham, where he graduated in 2004 with a mathematics degree. He worked at a local bank until he realized his desire to work in the family business.

Couture began MMA training in 2006, working diligently to mature into a well-rounded fighter, adding Muay Thai and a dangerous submission game to his repertoire.  In January 2008, he moved to Las Vegas to train with his father.  He has had access to a who’s who of MMA royalty as training partners and coaches, which, coupled with a solid amateur career, has given him the background and confidence to take his fight career to the next level

Doors at Jackson Convention Complex will open at 6:45 p.m. CT.  The first non-televised preliminary bout will begin at 7:30 p.m. The first fight on SHOWTIME will begin at 9 p.m.