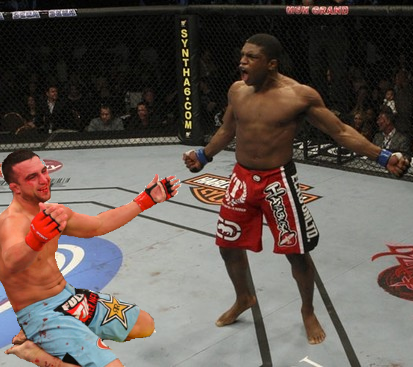 A welterweight bout between England’s Paul “Semtex” Daley (25-9-2) and Scott “Hands of Steel” Smith (17-7, 1 NC) has been added to Strikeforce‘s Dec. 4 card in St. Louis. ProMMAnow.com was notified of the bout Wednesday via press release.

Daley vs. Smith will be part of the main card which will air live on Showtime and is headlined by Dan Henderson vs. Renato “Babalu” Sobral. Football star-turned-fighter Herschel Walker will make his return to the Strikeforce cage on this card.

Daley, who was cut from the UFC after a much publicized after-the-bell and on purpose punch to the face of his opponent Josh Koscheck at UFC 113 back in May, has put together a pair of wins since departing the organization.

In July, he scored a second round submission win over Daniel Acacio at Impact FC 2 in Australia, and then won a tough fought unanimous decision against the very game Jorge Masvidal at Shark Fights 13 earlier this month.

Smith is 3-3 in his last six fights. His most recent fight was a rematch from a 2009 comeback of the year candidate with Cung Le. Smith won the first one with a knockout but Cung got the better of him in the rematch which took place in June of this year.

Anytime Scoot Smith fights, the potential is there for fans to witness a fight of the year caliber performance. And when you throw another striker in the cage with him, like a Cung Le, or in this case Paul Daley, it is guaranteed fireworks.