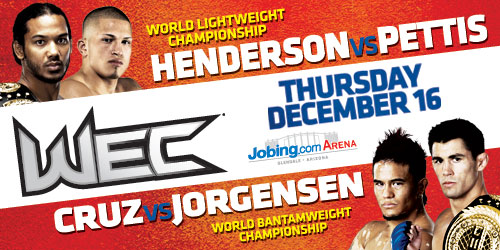 On Thursday, Dec. 16, World Extreme Cagefighting heads to the state of Arizona for the first time with WEC 53 at Jobing.com Arena in Glendale.

WEC General Manager Reed Harris explained in a press release on Monday why Arizona deserved a card of this magnitude,

“Arizona deserved a card like this after winning the Amp Energy Hometown Takedown contest. Fans in the Phoenix market voted for over two months and beat out 30 other cities to bring WEC to their area. Now, we are bringing fans two awesome title fights to Jobing.com Arena. Glendale’s Ben Henderson will face the stiffest test of his career in Anthony Pettis. Plus, Cruz-Jorgensen has the chance to be one of the greatest bantamweight title fights of all time.. We cannot wait for this event in Glendale.”

Undefeated in the WEC, Henderson is on an incredible ten fight win streak. He won the interim lightweight title with a unanimous decision over Donald Cerrone at WEC 43 last year, then won the real title three months later by submitting Jamie Varner at WEC 46. Four months later at WEC 48 in April of this year, he defeated Cerrone again, this time by first round submission.

Henderson talked about fighting in his hometown and his respect for Pettis,

“I’m very excited to fight in front of my friends and family in Glendale. Pettis brings high-energy and good skill set to the table. He’s dynamic and tough, and he showed a lot of heart and grit by tapping out Shane Roller with a triangle in his last fight. If he wants it, let’s find out who the better man is on Dec. 16.”

Pettis’ only loss was in December of last year against Bart Palaszewski. Evidently he decided to turn things around in 2010 and has won all three of his fights so far this year. He took out Danny Castillo via head kick in March, submitted Alex Karalexis in april and most recently, in August, submitted Shane Roller. Will “Smooth” Ben Henderson be next? He commented on the match-up,

“I love the match-up. Ben Henderson is at the top of the division and that’s where I want to be. He’s a well-rounded fighter who brings it every time. Neither of us quit so it’s going to be an interesting fight. I’m going to be ready for everything and anything.”

Cruz won the bantamweight title earlier this year with a TKO over Brian Bowles at WEC 47 in March. Following that he won a split decision over Joseph Benavidez in August at WEC 50. He spoke about facing Jorgensen in what will be his second title defense,

“He’s a strong, powerful guy with great wrestling ability. But his winning streak means nothing to me because I’m on a streak myself. He’s got a different matchup with me and I’m excited to put an end to his streak. I’ve got nothing but respect for the guy, he’s a great fighter, but I’m going to be better that night.”

“I’m going to beat him down for 25 minutes. I want to fight for five rounds because I’m a grinder, that’s what I do. That’s a scary thing for Dominick to face. He’s never had an opponent that is built like me and has the mindset that I’ve got. He’s in for a rude awakening when he gets in that cage with me. He’s never felt the pressure that I’m going to bring.”