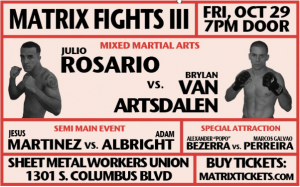 Philadelphia, PA – Coming off the heels of two sold out shows earlier this year, Matrix Fights (www.MatrixFights.com) plans to close out its successful 2010 inaugural campaign with an October 29 event scheduled to once again emanate from the great fighting city of Philadelphia.

Tickets for the event are now on-sale online at www.MatrixFights..com.

“When you take into account their amateur careers, both Julio and Brylan have been on the MMA scene for a couple of years now. Other promotions have tried to make this fight happen and we’re excited that Matrix has been able to finally put this fight together,” said Matrix Fights promoter Jimmy Binns. “You have two of the best featherweight fighters from two of the best schools in the area. The atmosphere at the Sheet Metal Union Hall is going to be electric!”

Van Artsdalen turned pro earlier this year following a stellar amateur career in which he went 6-0, earning a reputation as one of the top amateurs in the country at 145 pounds. His high ranking amateur status earned him an opportunity to make his pro debut on a nationally televised Bellator Fighting Championships event in Connecticut this past April.

After dominating Rich de los Reyes both standing and on the floor, the New Jersey native appeared to experience what was believed to be an adrenaline dump and was caught in a choke. He rebounded on June 11 at Matrix Fights II, needing just 15 seconds to submit Kansas native Shane Hutchison with an anaconda choke.

When asked if bragging rights would be on the line on Oct. 29, Van Artsdalen initially tried to downplay any sort of American Forces rivalry but in the end couldn’t ignore the significance of the Army vs. Marines dynamic.

“I don’t believe in rivalry between soldiers,” he said. “We all have one goal in life when we sign on that dotted line and that is to protect our family, friends, and country from foreign and domestic [threats]. But… if you have to ask?!  Yeah, it’s bragging rights (laughing).”

Rosario is a three-stripe purple belt under Rigan Machado and in the past has fought for things greater than world championship titles; namely the freedom and security of American citizens through his time served in the Marine Corps.

The 32-year old Rosario served in the Marines from 2003-2007 and was deployed on three tours of duty in Iraq. Soon after completing his service, he moved back home to the Tri-State area and eventually opened his own MMA school, Semper Fi MMA Academy, located in Rockledge, PA.

In addition to training, teaching, and competing in MMA and sport jiu-jitsu, Rosario also continues to serve his community. The former Sargent and current U.S. Marine Reserve donates his time to help to raise money for the Breast Cancer Walk Association, The Semper Fi Wounded Marine Fund, and The Fallen Police Officers of Philadelphia. Rosario even offers free rape safe and self defense seminars throughout the year on college campuses and community centers.

“I know he’s in the service as well,” commented Rosario when asked about his thoughts on fighting a fellow serviceman. “I have nothing against him for that cause… But we’re home and bragging rights apply. I can’t give him the glory that he beat a Marine. It’s another fight I’m taking very serious and as a marine I can only say prepare for war!”

“We are honored to have two real life heroes representing Matrix in our next main event,” added Matrix Fights CEO Phil Migliarese. “But despite their commitment to their country outside of the cage, make no mistake that Julio and Brylan are extremely talented mixed martial artists. Local fight fans are going to be treated to an amazing fight.”

Tickets for Matrix Fights III at the Philadelphia Sheet Metal Union Workers Hall begin at $55 and are now on-sale at www.MatrixFights.com as well as on location at top area MMA schools such as Daddis Fight Camps, Balance Studios, and Semper Fi MMA Academy.

For more information and video of previous fights, along with updates to the fight card, please visit www..MatrixFights.com.