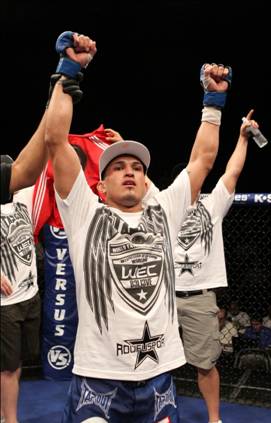 World Extreme Cagefighting lightweight contender Anthony Pettis (12-1) will be featured on the new MTV show “World of Jenks” on Monday, Sept. 27 at 10 p.m. ET/ 9 p.m. CT. The episode will chronicle Pettis’ life and training as he prepares for his fight against Danny Castillo which took place at WEC 47 back in March.

If you have yet to see an episode of “World of Jenks” it is a fresh departure from the likes of The Real World and Jersey Shore type programming the network is known for. Andrew Jenks, better known as “Jenks” on the show, is a documentary filmmaker who focuses on the lives of interesting people by basically living with them and spending time with them 24/7 to see what their life is like. It’s a simple but surprisingly powerful formula.

In the premiere episode Jenks, a young white 20-something from the suburbs, moves in with Maino, a hardcore street-wise rapper who spent ten years in prison, but is now a highly successful entertainer. In following episodes Jenks has followed the life of a young man with Autism, a professional cheerleader and a young homeless woman.

Pettis, who has fought twice and won both times since the taping of the show, commented on his experience:

“I grew up watching MTV and never thought I’d get the chance to be on one of their shows. It was an absolute honor to work with Andrew and the staff at MTV. I hope fight fans tune in to see Jenks join me in the days leading up to my fight with Castillo.”

Here is the full episode summary from MTV.com:

With ultimate fighting rapidly gaining in popularity, spending time with a fighter was at the top of my list. Plus, I never understood people who beat each other up for a living. From the info we were able to dig up online, Anthony was a perfect choice and we quickly reached out to get him involved. Little did I know that his career in the WEC was just one of his many important responsibilities. From tragedy striking his family, to being a role model in his community, Anthony had way more than a possible title shot weighing on his shoulders. My time with Anthony shattered my perception of his sport and taught me a lot about what it really means to be a champion. Even though there’s only two guys in the ring, they’re never fighting alone.

Coincidentally (or not), it was just announced today that Pettis will face WEC lightweight champion Ben Henderson on Dec. 16 at WEC 53 for the title.