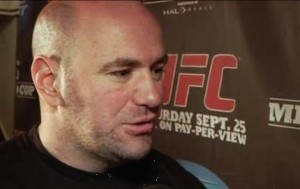 UFC President Dana White weighs in on all the latest UFC happenings in this pre-UFC 119 interview he did with Ariel Helwani Thursday in Indianapolis. The Prez says there’s more to the Chael Sonnen steroid story than meets the eye and that’s being talked about, but he’s staying out of it and it will all come out in the commission hearings.

White rips newly signed Strikeforce heavyweight Josh Barnett and referred specifically to an interview Barnett did last week. White said Barnett is only concerned with himself, has been busted three times for steroids and each time denies that he did it. He also brought up the fact Barnett has shown no remorse for his part in bringing down Affliction and the money he cost fighters, promoters and ticket-buyers.

White talks about Todd Duffee who was recently released from the UFC, saying Duffee’s biggest problem was his attitude. He did leave a door open for Duffee to one day return to the Octagon. Finally, White talks about the reasons Efrain Escudero was recently cut from the roster as well, saying it mostly had to do with his recent loss and missing weight.