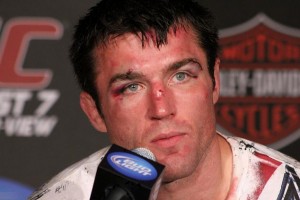 Sonnen dominated Silva with punches, takedowns and ground and pound for the majority of five rounds until Silva slapped on a triangle choke submission with less than two minutes remaining in the bout forcing Sonnen to tapout.

The details of the suspension were noted in a statement released the CSAC on Wednesday:

A sample from Sonnen’s August 6 drug test came back with a high T/E (testosterone-to-estrogen) level, which is indicative of anaboloic steroid use. CSAC learned of the results September 2 and ordered a second test, which also came back positive for steroid use. CSAC received test results from the second sample on September 14 and suspended Sonnen two days later. He is suspended for one year. Sonnen has 30 days to appeal the decision.

“The use of anabolic steroids and other banned substances are not tolerated by the commission,” said CSAC Executive Officer George Dodd. “Anabolic agents put the health and safety of both the user and his opponents at risk.”

Sonnen’s test was observed in the presence of a CSAC representative and the sample was sent to the World Anti-doping Agency test facility at the University of California, Los Angeles on August 6, 2010 for processing.

Sonnen had been granted an immediate rematch against Silva for another shot at the title, but because of his suspension Silva will now face Vitor Belfort, possibly at UFC 125 on Jan. 1, 2011, in Las Vegas.

4 thoughts on “Chael Sonnen receives one year suspension from CSAC”