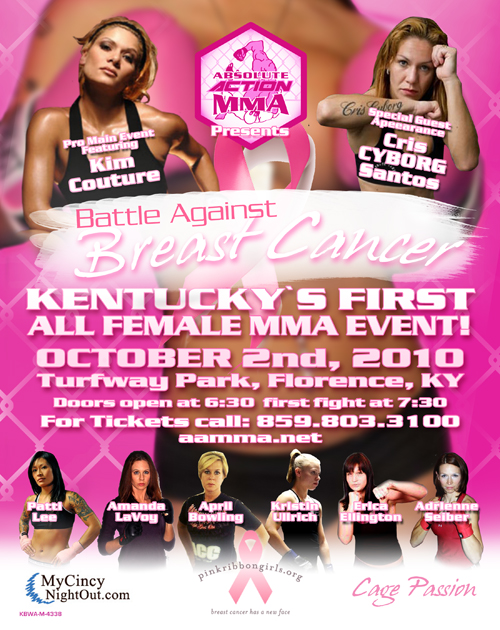 FLORENCE, Ky. — Absolute Action MMA will hold an all female pro/am mixed martial arts card entitled “Battle Against Breast Cancer” on Oct. 2 at Turfway Park in Florence, Ky., to help raise money for the Pink Ribbon Girls, a charity organization whose goal is to provide support to patients and families dealing with breast cancer.

Headlining the card will be Strikeforce veteran Kim “Sugar Free” Couture (2-3), the ex-wife of UFC Hall of Famer Randy “The Natural” Couture, taking on newcomer Felicia Wells (0-0), a local girl who fights out of Kentucky and will be making her professional debut.

Couture has fought twice so far in 2010, winning the first bout via first round TKO against Rosa Vizcarra (0-1) at “Xtreme Fighters 1” in March. Her most recent fight ended in a first round triangle choke submission loss to Marianna Kheyfets (1-0) at XFC 11 in July.

Wells will be Couture’s third opponent in a row who is making their pro debut. She fights out of Kentucky and has a listed amateur record of 1-1. She lost her most recent bout via unanimous decision to Evva Johnson at “Hardrock MMA 19” back in February. Wells won her amateur debut via submission due to strikes against Hope Ashley at “Wicktagon MMA” in Nov. 2009.

SPECIAL GUEST APPEARANCE: Strikeforce 145 lb. champion Cristiane “Cyborg” Santos will be at the event and will work the corner of Couture.

Also fighting on this card is Strikeforce veteran Elaina Maxwell (4-3), who will be taking on another fighter making her pro debut, Ashley Nee (0-0), who fights out of Scott Shields Martial Arts Academy in Charlotte, N.C.

Maxwell  has won her last two fights, both in 2010. She scored a first round TKO over Lizbeth Carreiro (5-7) at “Freestyle Cage Fighting 44” in July and then a unanimous decision over Alexis Davis at (8-4) “Raging Wolf 9” in August. Maxwell is a Nor-Cal fighter training out of Combat Sports Academy in Dublin, Ca.

Though this will be Nee’s pro debut, she is listed at 2-1 as an am, with all three fights going the distance. She fought twice in 2009, defeating Kristen Trull via unanimous decision at “Elite Championship Cage Fighting 8” in August, then won a split decision over Gina Elko at “Fight to the Finish VII” in September. Her most recent bout was a split decision loss to Taylor Miller earlier this month.

Mark you calendars for “AAMMA: Battle Against Breast Cancer,” which will air LIVE in an online $9.99 Pay-Per-View at www.cagefightinglive.com on Oct. 2. It’s for a great cause! To attend the live event at Turfway Park call 859-803-3100 for tickets. Visit www.aamma.net for directions or more info.