Manny Gamburyan confident he will stop Jose Aldo at WEC 51 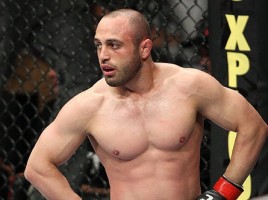 WEC featherweight contender Manny Gamburyan (13-5) understands that he has quite a difficult task in front of him when he faces champion Jose Aldo (17-1), a man considered a top-five pound-for-pound fighter by many fans and pundits. But on Sept. 30 at the WEC 51 main event in Broomfield, Colo., Gamburyan seems determined to prove he has Aldo’s kryptonite.

“I respect him as a fighter; he’s a great champion,” Gamburyan said during a Monday WEC media call. “But I’m going to show the fans that anyone can be stopped.”

Just by listening to his voice and his focus, Gamburyan sounds as if he is in peak condition and at the top of his game.

“I got the skills, I got the power…I’ve never felt like this,” Gamburyan said when asked whether he has the skills to pull off the upset. “Every fighter has holes in his game.”

As dominant as Aldo has looked lately, including a thorough beating of former title holder Urijah Faber at WEC 48, he isn’t taking Gamburyan lightly.

Speaking through an interpreter, Aldo said he knows he has to watch out for Manny’s wrestling, Judo and heavy hands. Aldo also said that he arrived in Denver today to get acclimated to the high altitude.

Gamburyan, meanwhile, is confident that the altitude won’t affect his cardio, noting that he felt comfortable fighting at the same venue when he defeated Jeff Cox during his stint as a UFC lightweight.

When asked to breakdown the fight, WEC General Manager Reed Harris replied, “I really don’t see any weaknesses in either guy.”

Aldo is one of the best in the world at any weight class, but Gamburyan is undefeated since moving to 145 pounds, Harris said.

“Knocking out Mike Brown was huge for him but also showed everyone in the division that he has a lot of power,” Harris said of Gamburyan.

With Aldo’s status so high, it would be easy to jump ahead and envision him moving on to a super fight in another weight class should he defeat Gamburyan. But Harris said that won’t happen any time soon, adding that there enough challengers at 145 to keep Aldo busy for a year or two.

“Josh Grispi was just telling me a couple of weeks ago he’d love the opportunity to get in front of Jose” and fight him, Harris said.