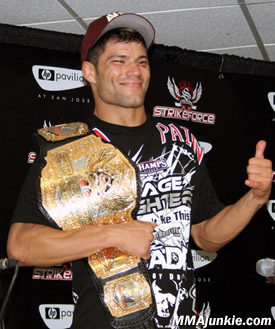 Former Strikeforce lightweight champion Josh Thomson (17-3) put together one of the most impressive, well-rounded performance in 2008 to take the title away from the highly-regarded Gilbert Melendez. But things went downhill for Thomson after that.

A broken leg postponed the rematch with Melendez, and when the two finally met again in December 2009, Melendez returned the favor and won back the belt with a comfortable decision win.

As a result, you could excuse Thomson for looking ahead to a rubber match with Melendez. In MMA, though, it’s always dangerous to look too far ahead, and Thomson admits that his eagerness to get another crack at Melendez distracted him this past June when he defeated Pat Healy.

“I let that get in the way of my actual training,” Thomson said. He called the win over Healy “a really lackluster performance. Nothing was put together right.”

Now, as cliché as it sounds, Thomson is taking things one fight at a time. And he better, since he’ll face perennial lightweight contender Gesias “JZ” Cavalcante (15-3-1) on Oct. 9 in San Jose.

Thomson has nothing but positive things to say about JZ and expects a difficult, fast-paced, entertaining fight wherever things end up.

“I’m excited for it,” Thomson said on Friday in a Strikeforce media call. “It’s been a rough camp. Training for someone of JZ’s caliber, you want to make sure training goes perfect.

“I don’t think either one of us has an advantage in any area,” Thomson said. “He’s very well rounded … he’s got phenomenal standup, he fights to the end.”

Training with American Top Team, JZ works alongside plenty of tough lightweights, including Cole Miller, Gleison Tibau, and Jorge Masvidal. Still, Thomson believes JZ is the best lightweight at ATT and would be recognized as the best fighter in a very talented Japanese fighting circuit if not for his recent injuries.

Everyone I’ve talked to has said “he’s by far, hands down, the best 155-pounder in that gym,” Thomson said. “That says something.”

He continued, “I know that in that first round I’m going to take some big shots, he’s going to put some pressure on me.”

As you might expect, Thomson expects fans to get their moneys worth when the two square off and welcome a fighter of JZ’s caliber back to American soil.

‘This is a fight they wouldn’t see anywhere else; the hardcore fans have been waiting…for JZ to come to the states.”