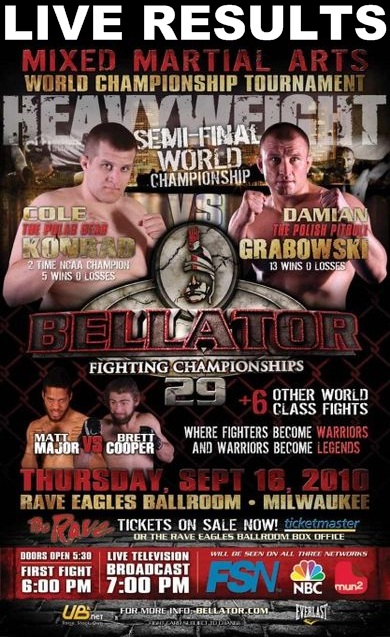 Bellator Fighting Championships returns this week with Bellator 29 at the Rave-Eagles Ballroom in Milwaukee, Wis. The event will actually mark the very first sanctioned MMA card in the state of Wisconsin. Main card action will air live on FOX Sports Net starting at 7 p.m. CT, so join us here as ProMMAnow.com provides live results and play-by-play commentary.

There are two Bellator season three heavyweight tournament semifinal bouts on this card: Damian Grabowski vs. Cole Konrad and Alexy Oleinik vs. Neil Grove. Other notable names on this card include Matt Major and Jason Guida.

Round 1 – This is a heavyweight tournament semifinal bout. Huge leg kick from Grove. Again. Another big kick by Gove to the body and Oleinik goes down. Grove follows up with ferocious punches and ground and pound and the ref stops the fight. Oleinik has big lumps on his head. Forty-five seconds flat. Jimmy Smith thinks the ref may have stopped it a bit early but it was not a terrible call by any stretch of the imagination. Grove moves into the finals, will fight the winner of Grabowski vs. Konrad.

Round 1 – The winner of this fight will face Neil Grove in the finals. Grabowski is still undefeated at 13-0. And Konrad is also undefeated at 5-0. Konrad ducks under Grabowski’s punch and immediately takes him down. Right off the bat. Konrad has side control. Big knee to the ribs, again, again, again. Grabowski bucks to no avail. Konrad goes back to the knee strikes four of them. He tries to put Grabowski in a crucifix but he gets his arm out from between Konrad’s legs. Konrad in half guard now. Konrad using small punches, no real damage but maintaining control. Ref calls for action. Konrad lays on top for a 10-9 round.

Round 2 – Grabowski swings, Konrad gets the clinch and forces the takedown, lands on top in half guard. Grabowski looking for a kimura, has a hold onto Konrad’s arm but so far unable to yank it behind the back. Konrad forces out of it. Ref stands them up. Leg kick checked by Konrad then gives a big leg kick. Another one. Konrad stuffs a takedown and puts Grabowski on the ground. Konrad on top in half guard, going for a kimura. Konrad in half guard, couldn’t get the kimura, switches to a key lock but Grabowski escapes it. Konrad grinds out the round from top. 10-9 for Konrad.

Round 3 – Konrad with a big takedown, lands inside full guard. About a foot of tape hanging off Grabowski’s glove. It falls off. Ref pulls it away. Grabowski gets out and up for the first time in the fight. Ref stops it to cut some tape off Grabowski’s glove. Stupid chants of USA. Grabowski amazingly gets a takedown and attempts a guillotine. Konrad is out. Grabowski turns on the head with punches. Konrad gets a big trip takedown as Grabowski throws a knee. Konrad on top in half guard but stands them up very quickly. Big left from Grabowski lands. He lands a right hand. Leg kick from Konrad. One minute left. Konrad with a big takedown, lands in half guard on top and starts with some small punches. Ref calls for action. Why Konrad doesn’t try more powerful and aggressive ground and pound I don’t know but he ground out another 10-9 round and a 30-27 fight as I see it.

Round 1 – Massouh hunting. Mamalis with a Superman punch but eats one. Big knees from Massouh in the clinch. Knee to the body from Mamalis and Massouh fires off a punch as they exit the clinch. Nice Superman punch from Mamalis connects. Push kick and leg kick from Massouh. Big leg kick from Massouh. Head kick from Massouh. Mamalis eats a right as he’s keeping his hands low and chin high. Flying knee misses for Mamalis. Massouh jumps for a gullotine, he lets go, grabs a Thai clinch and lands some knees. He backs out and Mamalis lands a shot. Right jab from Mamalis, still has his hands low. Mamalis shoots and Massouh locks on an arm in guilltine while Mamalis is standing. He wraps his legs around Mamalis and squeezes tight… it’s deep. Mamlis kneels down with Massouh hanging on the guillotine and Mamalis taps out. Very impressive performance from Jameel Massouh.