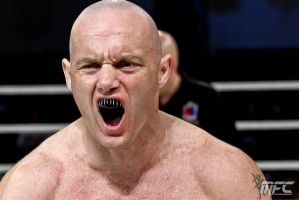 Leading up to MFC shows over the past few years, The Z-Files takes an in-depth look at the card, the fighters themselves, and the ramifications of each bout, all leading to the Top 10 Questions.

And in the past year, following each show The Z-Files has expanded its review and added in a rundown of notes, quotes, and fallout. These are not necessarily answers to the Top 10 Questions that were posed coming into the event, but some insight into what happened and what’s in store in the future based upon the results.

It was the most-asked question just hours after the show. Is Douglas Lima that good or did Ryan Ford have an off night? It’s completely unfair and false to take anything away from Lima’s performance by putting the onus back on Ford. Simply put – Lima was that good. He stayed calm under the expected pressure from Ford, never panicked when he was on his back, and so smoothly sunk in the fight-finishing submission.

The decisive win begs more questions though including whom does Lima face in his expected title shot, and what is next for Ford. And there are questions arising about Ford’s future. Yes he only has three losses in 15 fights but he’s been submitted twice by armbar and more notably hasn’t peaked when it’s needed the most (two failed shots at the title and now dropping a title eliminator).

And how about this from the Lima locker room … so sure was Lima and his trainer Roan Carneiro that the bout vs. Ford would go five rounds that because it finished early in Round 2, Lima kept his gloves on and did a five-minute round on the pads after the fight. Other than visiting with the doctor, the only acceptable reason for being last guy to the post-fight press conference is that you’re still working.

Antonio McKee may be one of the most radically outspoken fighters around, but for all the doubters who figured he’d fall back on his “boring” style to pull out another decision, they got a very rude awakening when he showcased an all-out aggressive attack in dispatching of Luciano Azevedo inside the opening four minutes of the fight.

And what did McKee get out of the fight? I think not only did he achieve finding some new-found respect from MMA insiders, but more importantly, McKee got the love of the crowd at long last. Fans had always respected his record and longevity but they didn’t care for his win-at-no-cost style. By adopting a more exciting approach, McKee was rewarded with the fans’ appreciation.

While McKee went for more entertainment value, Jesse Taylor took a page out of McKee’s old playbook and used a smothering attack – though complemented by several submission attempts – to stall Tom Watson’s climb up the ladder. Taylor was relentless and virtually mistake-free. Watson wasn’t given any room to pull the trigger while the fighters were standing and unable to find any groove on the ground where he struggled against Taylor’s strong swarming.

Though he was unable to finish the fight, it was evident that Ford Robertson’s wrestling is at a serious level. He controlled nearly every minute of his test against seasoned pro Andrew Buckland. There are certainly things to work on if he intends to go further and it would be interesting to see what kind of stand-up game he can put together, but there is much to work with.

You have to like both Curtis Demarce and Tyson Steele. Good kids both who put on a terrific tussle with Demarce coming out on top as he benefitted from his wealth of experience. There are some good fights down the road coming for these two.

Best Superman punch knockout ever? Maybe so. Regardless it was a big splash for David Heath in his 185-pound debut. First he busted open Solomon Hutcherson from the bottom. Then nearly ended the fight with beautiful spinning backfist. Then came the supremely executed smashing blow that turned the lights out on “King” Solomon. Heath came into the fight declaring it the start of his new career and he lived up to the touted rebirth. But give both guys credit – it was the show stealer that everyone predicted it would be.

Speaking of Hutcherson, both he and Luciano Azevedo were walking wounded after their respective bouts. Hutcherson’s face was busted up by the assault from Heath while Azevedo suffered what many were calling the worst cut they’d ever seen in MMA as his forehead was split open by vicious McKee elbows.

Dwayne Lewis uses the uppercut better than 90% of all fighters in MMA. For references, check with Ryan McClain, Jay Whitford, Marvin Eastman, and now, Mike Nickels.