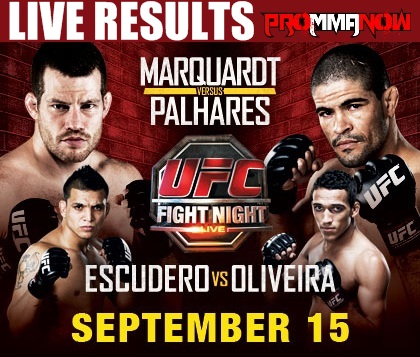 The other fights scheduled for the television broadcast include a host of lightweight bouts between several guys who are just a good win or two away from moving into the top-10. Gleison Tibau (21-6) will face Jim Miller (17-2), Cole Miller (16-4) will face The Ultimate Fighter season nine winner Ross Pearson (11-3) and undefeated Brazilian Charles Oliveira (13-0) takes on The Ultimate Fighter season eight winner Efrain Escudero (13-1).

Round 1 – Leg kick Pearson. Again. Miller gives him one and Pearson lands a big leg kick. Leg kick Miller. Nice left hook by Pearson. Then a leg kick. Pearson comes forward swinging and Miller shoots. Miller finally gets him down but Pearson bounces right up. Knee from Miller, he jumps guard, Pearson lets him down. Miller lands a nice punch. Pearson scores with a  punch as Miller throws an elbow. Big leg kick from Pearson. Big left jab from Pearson, then a leg kick, another big leg kick. Miller with the jab and a counter left hook. Side kick Miller. Miller with a leg kick but Pearson counters with his own.Miller using this pushing side kick quite a few times. Close round. I’m gonna give it to Miller 10-9.

Round 2 – Big leg kick from Pearson. Leg kick Miller. Left jab from Miller. Big left hook body shot from Pearson. Miller shoots, pulls guard. Pearson is out and up. Nice right from the Brit. Nice big right hand from Miller rocks Pearson, he knows he’s hurt and drops him with another big punch, jumps on his back and chokes him out with a rear-naked choke. It was a huge left hook that dropped Pearson before getting the choke. Big win for Cole Miller.

Round 1 – Leg kick Miller. Tibau fires back with punches. Tibau looks enormous. Leg kick Miller. Tibau catches his leg on the next one and takes him down. Miller with butterfly guard. Miller kicks him off and gets up. Huge right hand from Miller rocks Tibau, it was basically a jab and Tibau stumbled. Tibau gets a takedown but Miller is right back up. Clinched. Dirty boxing, Tibau backs out. Miller with a body kick, gets it caught but retains his balance. Miller shoots, gets stuffed. Tibau pushes him against the cage. Tibau backs out, catches a leg kick, lets it go. Big right hand from Tibau. He catches another kick, lets it go. Miller lands three nice punches right on the chin. Left hand for Tibau. Miller gets the round 10-9.

Round 2 – Huge left hand rocks Tibau, he tries to jump on his back but Tibau won’t go down. Big jumping knee to the body from Miller. Miller grabs a leg, Tibau goes down but bounces right up. Miller should have KO’d him on the feet. He was hurt. No Miller is wasting time letting him recover in the clinch. Miller could have finished that damn fight. He may have screwed himself. Tibau shoots under Miller’s arms and puts Miller down. Miller is right back up. No harm, no foul. Tibau connects with a counter punch. Right hand by Miller. Leg kick Miller. Miller gets a single but Tibau pulls out and Tibau gets a big takedown. Tibau with short hammerfists. He dives in with a left. Close round. I’m going to give it to Miller because of how he rocked him early on and he landed more effective punches. Tibau got takedowns but did nothing significant with them. 10-9 Miller.

Round 1 – Flying knee by Oliveira and Escudero ties him up against the cage. Enormous leg kick from Oliveira, then a big right hand. Oliveira connected with a stunning left hand and immediately shot while Escudero was still trying to figure out what hit him. But Escudero stuffed the takedown. Leg kick Oliveira. Again. Nice right from Oliveira, the throws a jumping kick and eats a punch. Inside leg kick for Oliveira. Leg kick Oliveira. Another one to the inside. Oliveira shoots, gets a single but eats several punches for his trouble. Escudero ends up on top in half guard. A couple big elbows from Escudero to secure the round 10-9.

Round 1 – Nate with a leg kick, has his hands very low. He also has a low stance expecting the shoot. Palhares looks like a gorilla waiting. Uppercut from Palhares connects. Marquardt throws a combo but misses. Palhares gets a single , gets a takedown but lands upside down on Nate. He turns over now has side control. He goes for a armbar, Nate escapes, he tries to transition to leg lock. But Nate slides his leg right out. Palhares points at Nate’s legs saying he is greased and Nate comes running in with a big punch and lands a big shot. Nate follows it up with several punches until the ref stops it. Controversy. He’s saying Nate’s legs are greased. Everyone checked Nate’s legs afterward and he is clean. Doctors, ref, everyone checked him and he’s clean.