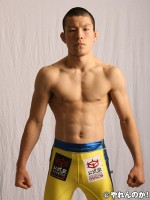 UFC welterweight contender Dan Hardy isn’t the only prominent fighter complaining about how some mixed martial artists use wrestling to win ugly decisions. DREAM lightweight standout Shinya Aoki has now thrown his hat into the mix.

In an interview with MMAFighting.com, Aoki said that in the “extreme form” of martial arts, which requires going for a KO or submission finish, he does not believe B.J. Penn lost his recent fight with Frankie Edgar at UFC 118.

“The American wrestling style – punching a little bit, getting a takedown and moving to side control to win the round has no risk. It’s an easier fight. It’s just using the judges. They don’t even have to worry about injuries or anything like that. There is no risk.”

“Would you like to see Frankie Edgar vs Gray Maynard? Do you think it would be interesting?” Aoki asks.

Meanwhile, UFC middleweight Nate Marquardt recently took a different stance than Hardy, suggesting that fighters who complain about wrestlers need to improve their own wrestling.