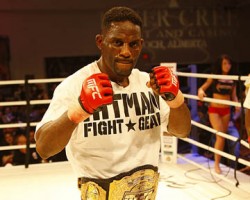 MFC Lightweight Champion Has Promised to Retire If He Can’t Finish His Opponent – Friday, 10:00 p.m. ET

DALLAS (September 9, 2010) With a professional record of 24-3-2 and a 14 fight undefeated streak that stretches back to 2003, Antonio “Mandingo” McKee should be known as one of the best lightweights in the world. Unfortunately, instead of dominating, the word that comes to mind most often to describe McKee is “boring'” due to the fact that 18 of his wins have come by decision.

After finishing one opponent in the last nine years and coming off an uninspired decision victory against Carlo Prater in October, McKee has promised to retire if his bout with Luciano Azevedo for the MFC Lightweight title at MFC 26: Retribution on Friday doesn’t deliver.

“When this fight is over, if it’s not what the fans want to see, I’m done,” said McKee. “I’ve taken everything the critics have thrown at me for the last five years. Now I’m going to shut them all up.”

His opponent Azevedo (16-8) is no push over – he handed WEC Featherweight Champion Jose Aldo his only defeat.

Michael “The Voice” Schiavello, who will call Friday night’s action live on HDNet thinks McKee may have talked himself into a tough predicament.

“He’s putting a lot of pressure on himself to change a successful style. That could open holes which someone like Azevedo can expose,” said Schiavello. “To his credit, he did win his last fight in March by first round submission, albeit on a small promotion, but once Azevedo starts to apply pressure and land some strikes, I wonder if Antonio won’t resort to what he knows best and that’s getting the top position and doing the old lay ‘n’ pray.”

“Antonio must be losing it,” said HDNet Fights CEO Andrew Simon. “First he calls out Bas Rutten and Guy Mezger. Then he says he will retire if he can’t finish the only man to defeat Jose Aldo? Antonio has been promising HDNet exciting fights for years – truthfully I think it’s up to his opponent to make him change his style – but I am excited to see the outcome of this unique stipulation Antonio has put on himself.”

The night’s co-main event promises to deliver a finish when Canada’s Ryan Ford, who boasts 11 finishes in 12 career wins, takes on Douglas Lima, who brings in a 57% submission ratio.

“There’s no way this one goes the distance,” says Schiavello. “Ford is on an absolute tear, having finished his last four opponents collectively in just over seven minutes! For those watching live on HDNet trust me when I say this is not the fight you want to be taking a bathroom break!”