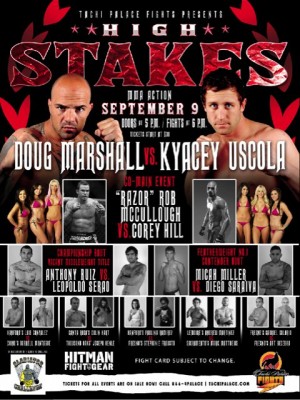 There’s a lot of MMA going on this weekend. One of the best cards takes place this evening at the Tachi Palace Hotel & Casino in Lemoore, Calif.

“Tachi Palace Fights 6: High Stakes” will feature the return of former UFC lightweight prospect Corey Hill (4-3). Hill was introduced to the MMA world during The Ultimate Fighter season five. Although he was young and raw he showed great potential and his natural ability and height threatened to make him a formidable opponent against anyone in the 155 lb. division.

Unfortunately, Hill suffered one of the most devastating and memorable injuries in UFC history when his leg was snapped completely in half while throwing a leg kick against opponent Dale Hartt during their fight at “UFC Fight for the Troops” in Dec. 2008.

Admirably Hill has bounced back with a ton of gusto and momentum, already fighting three times this year. Tonight he will face the biggest challenge of his career as he faces former WEC lightweight champion “Razor” Rob McCullough (18-6).

Hill’s first fight after the injury resulted in a unanimous decision win over Jason Trzewieczynski in Janurary of this year. His next fight was a second round kimura submission loss to Mark Holst in March. Then Hill gained his most notable vicotry when he submitted Kit Cope with a triangle choke in the first round at “Raging Wolf 8” in July.

McCullough’s career has been one-up one-down since losing his 155 lb. title to Jame Varner at WEC 32 in Feb. 2008. His most recent fight was a first round TKO win over Isaac DeJesus at Tachi Palace 5 in July.

Tonight’s main event features “The Rhino” Doug Marshall (12-3) taking on The Ultimate Fighter season 11 competitor Kyacey Uscola (18-15). “The Rhino” of course, is a former WEC light heavyweight champion and has won every single fight, five in all, since losing his WEC title to Brian Stann at WEC 33 in Dec. 2008.

Marshall’s most recent fight was a rear-naked choke victory over B.J. Lacy at Playboy Fight Night in March. Uscola hasn’t been inside the cage since October 2009 when he scored a second round TKO victory over Koffi Adzitso at “MMA Challenge: Fight Night Fights” in Idaho.

Other notable bouts on this card include Anthony Ruiz vs. Leopoldo Serao, Deigo Saraiva vs. Micah Miller and a female MMA bout between Paulina Ramirez and Stephanie Frausto, the sister of popular Strikeforce women’s competitor Zoila Frausto.

If you are not fortunate enough to catch the “Tachi Palace 6: High Stakes” fights live tonight in Lemoore, stay tuned to ProMMAnow.com as we provide live results and play-by-play commentary of all the action starting at approximately 9 p.m. ET / 6 p.m. PT.