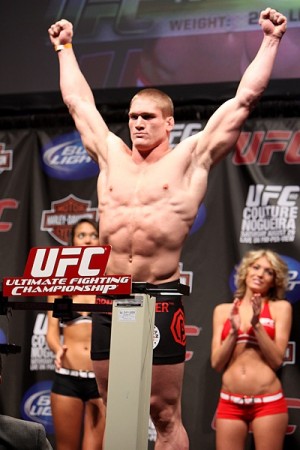 According to a new report on MMAJunkie, heavyweight fighter Todd Duffee (7-1) has been released by the UFC. The report states Duffee’s manager confirmed the news but would not elaborate or speculate as to the UFC’s reason for Duffee’s dismissal.

It is somewhat of an odd move. All seven of Duffee’s wins have come via knockout. He did lose his most recent bout via third round knockout to Mike Russow at UFC 114 back in May, but that was the only loss on his record.

Prior to that, he made his UFC debut by knocking out Tim Hague in seven seconds flat at UFC 102 in August of last year. It set the record for the fastest KO in UFC history.

Having turned pro in 2007, the 24-year-old Duffee is still young in his career. He currently lives in Las Vegas, Nev., and trains with Xtreme Couture. Whatever the UFC’s reasoning for letting him go, it’s doubtful he will remain a free agent for long.

Duffee recently pulled out of a planned UFC 121 bout against Jon Madsen due to injury.